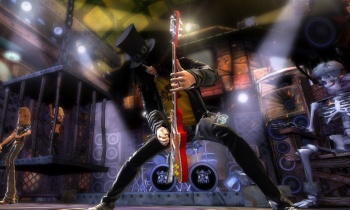 Axl Rose was angry about Slash’s inclusion in Guitar Hero III alongside a Guns N’ Roses song two years ago, and that anger has apparently boiled over into a lawsuit. The lead singer of Guns N’ Roses is suing Activision for $20 million over what he says is the improper use of “Welcome to the Jungle” in the game.

After Guitar Hero III was released, Rose did not welcome it and he thought it was full of anything but fun and games. When Activision approached Rose to receive permission to use “Welcome to the Jungle” in Guitar Hero III, he says he was ensured that Slash and his former bandmates’ new group Velvet Revolver would have no involvement with the game at all. Activision ended up putting Slash not just in the game, but on its cover, and Velvet Revolver songs came to Guitar Hero III as DLC.

Rose’s anger over the situation stems from his perception that Slash’s inclusion in Guitar Hero III confuses the public into associating him with Guns N’ Roses, even though he is no longer in the band. Court documents state that Rose is “careful not to license any use of the band’s name and intellectual property that would further perpetuate the confusion in the public mind between Slash and Guns N’ Roses.” Rose only allowed Activision to use “Welcome to the Jungle” under the assumption that Slash would not be featured as an in-game avatar, and he claims to have written proof.

I hate to say it, but Rose may have a case here. Whether his desire to keep Slash out of Guitar Hero III is logical or not, if Activision broke its agreement with Rose it could end up owing him some money. Court documents even say that Rose was approached by an Activision employee that apologized for the situation “in tears.” We’ll have to wait and see if Activision has a response to Rose’s lawsuit.