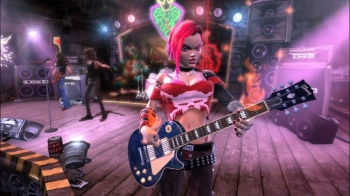 No more fun and games for the former lead singer of Guns N’ Roses as the judge rules in Activision’s favor.

Guns N’ Roses former front man Axl Rose was not too happy when he saw the band’s songs being used in conjunction with the likeness of former lead guitarist Slash in Guitar Hero III: Legends of Rock. It was enough for Rose to press charges against Activision, stating that the company broke a promise not to use either the band’s songs or Slash’s image. All those years of discontent may be for naught, though: a Los Angeles judge has finally dismissed the remains of the $20 million lawsuit.

Rose’s lawyer Geoffrey Neri stated during the two-hour hearing that the singer agreed to allow Activision use of the rock hit “Welcome to the Jungle” only if no images of the classic Guns N’ Roses lineup or of Slash’s former band Velvet Revolver were used in the game. The game ended up featuring Slash on the front cover, and Velvet Revolver songs were added to the game as DLC.

Lawyers objected on Rose’s behalf as Legends of Rock was being produced; Activision, on the other hand, continued despite his complaints, Rose’s court papers say.

Rose said that he never approved of Slash’s image being used in the game alongside the song since it would “further perpetuate the confusion in the public mind between Slash and Guns N’ Roses”. Slash left the group in 1996, and Rose has reputedly been on bad terms with several former band members since its collapse.