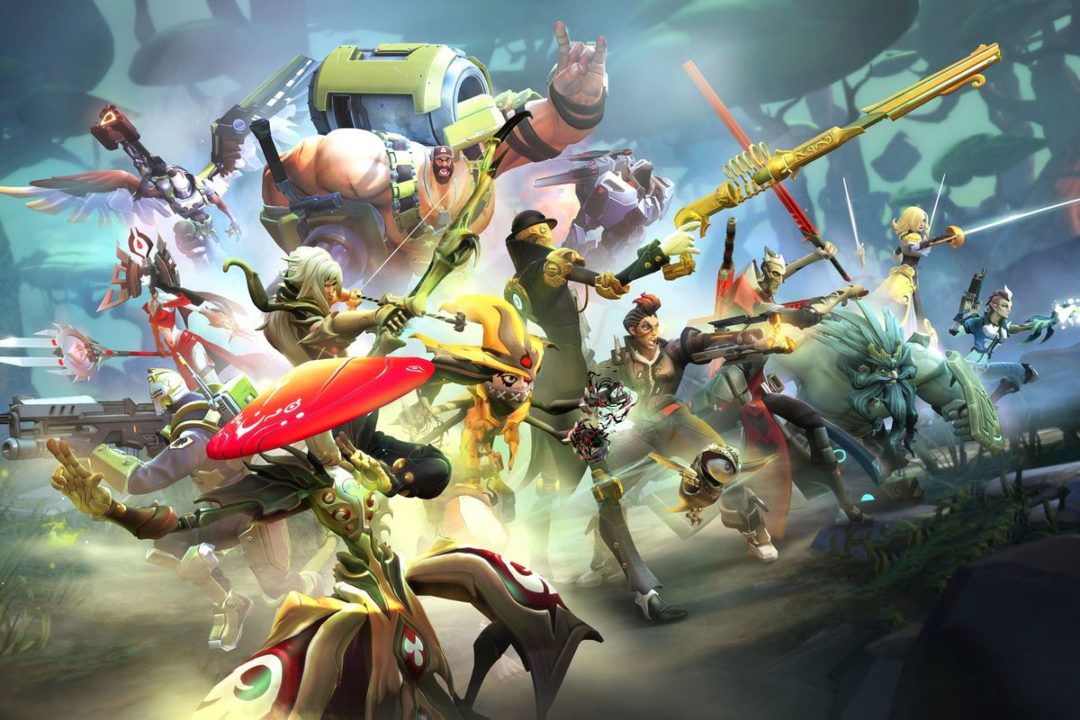 Battleborn is dead, or it might as well be. With the servers shutting down in January 2021, and digital copies pulled from most storefronts, it seems like the last star in Solus will be setting for good. There’s a dozen different explanations as to what did it in. Maybe it was Overwatch releasing within weeks of it, an unclear marketing scheme, or Gearbox’s souring reputation due to Aliens: Colonial Marines. We’ll never know for certain, but what I do know is that Battleborn deserved better.

What’s most astounding about Battleborn is it did so many things right. Where so many AAA projects are accused of not taking risks or having no sense of personality, Battleborn owns its identity from the second you start. Players are greeted with a hand-drawn music video introducing not only several of the game’s heroes, but the game’s irreverent and emotional tone. The story of Battleborn is a comedy with heart about the end of the galaxy. Everyone’s scrambling to survive, with only a band of misfits and antiheroes left to try and keep the last star burning bright for just a few days longer.

Where titles like Overwatch prefer to isolate their story, the raging multiplayer battles and heroics of Battleborn’s campaign missions all take place in the same world. Every faction still standing is constantly fighting with one another while the motley crew of protagonists tries desperately to sway the various groups towards a unified front against their greater enemy, the immortal warrior Rendain. Every multiplayer match and campaign mission is the team pulling odd jobs to muster enough support to stop the villain’s army of hulking Jennerit warriors and unholy monstrosities known as the Varelsi.

This format presents every outing like a Saturday morning cartoon. Your team (and opponents, in competitive play) is introduced amid animated fanfare, dropped into the latest episode of mayhem. Cooperative missions go so far as to have multiple alternate dialogue tracks, sometimes up to five different sets of jokes where other games would offer one. That’s in addition to all the unique dialogue for the 25+ playable characters across the entire campaign. That’s an astounding amount of work just to make missions feel fresh upon return runs, and goodness was there a great reason to run missions again. 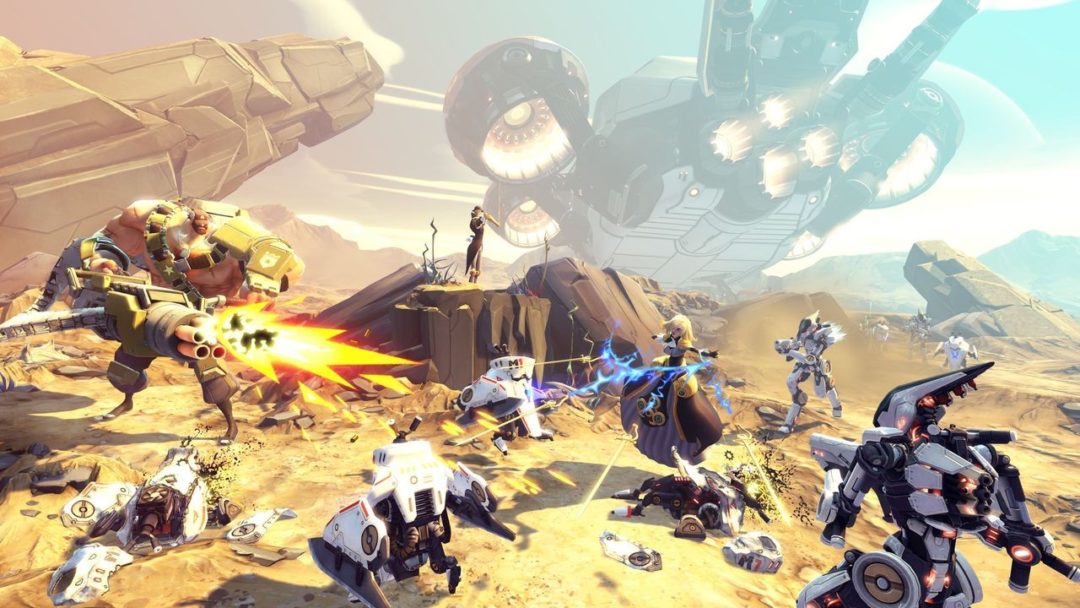 Battleborn is equal parts MOBA and hero shooter, yet it breaks the conventions of each wonderfully. Items aren’t something you find in the field or purchase but are earned from playing missions and matches, letting you preconfigure loadouts with your best gear. This means no matter what you are playing, you are always earning new ways to improve your strategy. You don’t have to hurriedly make decisions but instead gracefully learn your best play style. This extends into how characters level up mid-match.

Whether in cooperative or competitive play, Battleborn’s heroes earn experience that unlocks new abilities and modifiers. These can be as drastic as swapping out abilities for alternates or making your attacks leech from enemies at the cost of less damage per second. Once the match ends, the character goes back to their starting level, meaning you can try character builds at a rapid pace.

Is the tank Montana’s default minigun not doing it for you? You could give it a freezing effect or let it run hot — at the cost of losing some health in the bargain. Want to make the assassin Deande more mobile? Turn her decoy spawn into a platforming move that equally distracts opponents. All of this is intuitively presented with a simple two-option system, with a handful of third options unlocked after you put time into each character. This not only allows for vastly more ways to attempt any game mode, but a true sense of ownership and adaptability mid-battle. While your loadout is always fixed once selected, observant players can adapt to their opponents and new situations with ease. It also makes matches far less predictable, with supports able to hold their own against tanks if played properly.

That is the key difference in Battleborn. While other hero shooters have opted for either minimizing powers so that hero selection doesn’t skew the battlefield too far or encouraging swapping between heroes like you would weapons, Battleborn dares to make every hero viable. It’s astounding to witness, even now as I eke out my last few hours: A melee character with dodge moves and combo attacks that can also teleport. An assassin built entirely around tossing fan blades and area-of-effect leeching attacks. A Master Chief clone who can also go invisible. A witch with shotguns for hands and hexes. A sentient mushroom that can summon healing fungi while throwing knives in a fury. A redneck with a minigun who can send enemies flying with a stomp for allies to shoot apart. And I’m just scratching the surface. 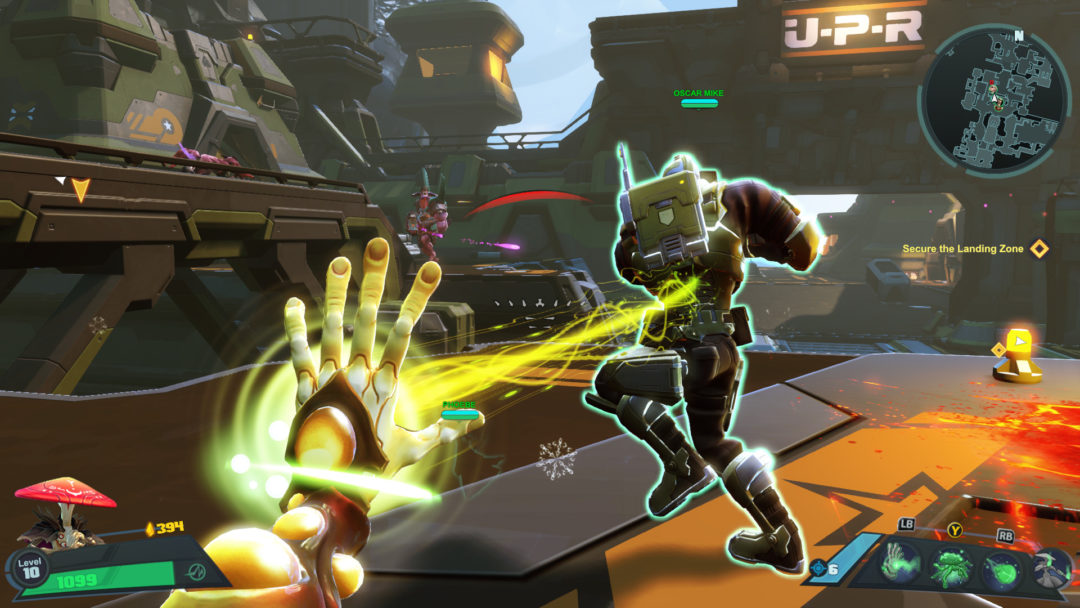 There are dozens of heroes that you can drastically mutate to your preference, who can work beautifully together in both cooperative and competitive play. I’ve soloed campaign missions as a support, fought groups of opponents in competitive play as a darting DPS. Where Overwatch falls into a single new meta, Battleborn held the potential for dozens of amazing strategies. The game’s multiplayer AI alone offers some of the fiercest bot matches I’ve ever played.

Gearbox achieved something special by providing the depth of a MOBA while maintaining accessibility. Just creating a competitive game to support all these options would be staggering, but then they went to the lengths of creating not only a campaign, but even more replayable DLC missions with randomized side objectives and ever increasing difficulty. By structuring each mission like an MMO raid, harnessing your rapid leveling and preconfigured loadouts, you get the sort of fun most MMOs make you wait hours for, but instantly. Within an hour, you can be fighting a giant mecha AI, leaping across platforms in pursuit of a tree deity, and confronting Rendain; few games of this generation can match the sheer scale of that climactic duel. With unique enemies, fresh lines of dialogue, and distinct objectives for each mission, it is incredibly replayable.

Across Steam and Xbox, I easily put in over 60 hours with Battleborn, and it was immensely rewarding. I haven’t even had a chance to dig into the beautiful animation work or the stunning post-launch updates that fixed practically every balance concern the game had. In some cases, Gearbox went to the lengths of rebuilding whole heroes’ progression trees from the ground up to make them all the more interesting. Its launch state was less than ideal, but within months they’d addressed most of the issues. Unfortunately, the internet is an impatient, fickle beast.

Battleborn tried so hard to get people to play it — and I’m going to, before it’s gone for good. It’s a shame that Battleborn is online-only and tied to a server. I know this day will come for several others “games as a service” titles I’m enjoying right now; heck, many thought Anthem would be dead before the year was out. The thing is though that we have other games like Anthem, Battlefield, and Overwatch. We don’t have another game quite like Battleborn right now, especially not in first-person.

Everything is such an intense grind now in video games. You’ll find yourself spending hours to finally have fun with a game. It’s so rare to experience something you can just pick up and play, and Battleborn was that. It trusted players to appreciate the depth offered without a tedious climb uphill. Players learned to play it skillfully, and it encouraged experimentation I’ve rarely seen outside of fighting games. It did so many things right, and now it’s fading away. No one will be able to even play the campaign or DLC missions. It’s not fair, but I’ll always remember my time with Battleborn, and until the servers shut down for good, I’ll battle on.