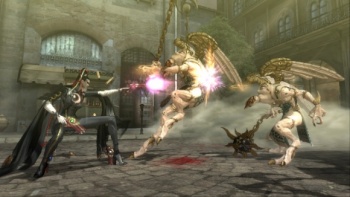 Sega’s new action game Bayonetta has been pushed back until the beginning of next year in the US.

Given that Sarah Palin Vs. Heaven is a title that is unlikely to ever get made, Bayonetta is gamers’ best, and possibly only, chance for a game featuring a gun-toting, bespectacled lady fighting angels, but if you had any hope of playing it this Fall, think again, as Sega has pushed back its release in the West to the beginning of next year.

“Bayonetta is an extremely important new IP for SEGA and adds a new level of depth to our growing portfolio,” said Sega West president and COO Mike Hayes in a statement. “As a result of market analysis, we have taken a Publishing decision that January 2010 is the optimum release time in the Western Markets to maximize this exciting new title’s potential.”

In other words, Sega doesn’t want to go toe-to-toe with Call of Duty: Modern Warfare 2, Guitar Hero and Tekken 6. Can’t say that I blame them really.