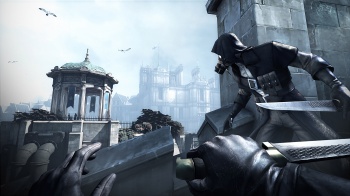 “Never say never,” says a Bethesda PR rep, regarding the possibility of Bethesda games on the Wii U and PSVita.

Bethesda, best known for the Fallout and The Elder Scrolls series, has released games for the PC, PS3 and Xbox 360, with plans to support the PS4 and Xbox One. What they haven’t published on, however, are neither Sony nor Nintendo’s handheld efforts (the PSVita and the 3DS), nor Nintendo’s Wii U. But that could possibly change in the future. Bethesda VP of PR and marketing Pete Hines said “We’ll wait and see. I would never say never. There are a lot of talented folks doing a lot of cool stuff, and maybe opportunities arise.”

Hines says that there is a lot of things Bethesda has done that people don’t associate with them. For example, the company has published mobile titles in the Dishonored and Rage franchises, although the latter was more or less “John [Carmack] going, ‘hey, I can get this to work on that, it’ll be fun,'” so the possibility of Bethesda opening up to other platforms is definitely there.

Nonetheless, Hines says that Bethesda isn’t going to force development on these platforms if it doesn’t feel natural. “Maybe somebody internally says, ‘hey, I have this great idea to do this thing on this platform.’ If that makes sense and it feels like something Bethesda would do, okay,” he said, adding: “But we’re not just going to bang a round peg into a square hole. That’s not how we work. It doesn’t make sense for us.”