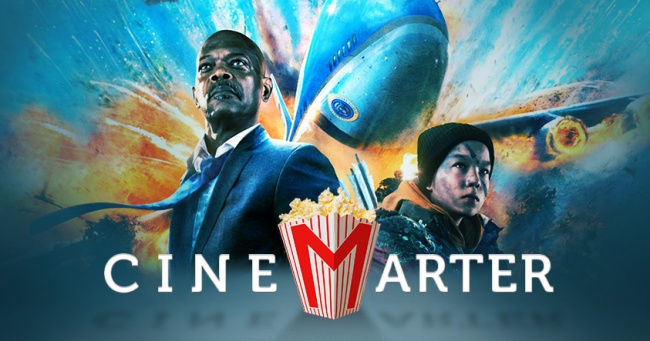 In an age when action movies are getting more and more complicated, Big Game comes out as something of an aberration. Much like The Expendables franchise, it acts as a simple throwback to action/adventure films from an earlier, simpler time. If it came out in the 1980s, it might star Steven Seagal or Val Kilmer, even if that would have made the lead character the youngest President of the United States (POTUS) ever. That, already, would be putting too much thought into it. You’re not supposed to think about how gleefully stupid this all is. Just sit back and enjoy the ride.

Instead of Seagal or Kilmer, the POTUS is played in Big Game by Samuel L. Jackson. After an attack on Air Force One leads to him being ejected over Finland, he finds himself alone in the forest. He’s found by 13-year-old Oskari (Onni Tommila), who is on a quest to hunt something and bring it back to his village – something that all boys in his village do in order to become a man. However, that will have to be put on hold as there are men who are going on a hunting mission of their own. The POTUS is the target – the titular “big game” – and the only thing standing between them and him is this child. Yes, we’re paralleling Oskari’s hunting quest with that of the men trying to kill the President. 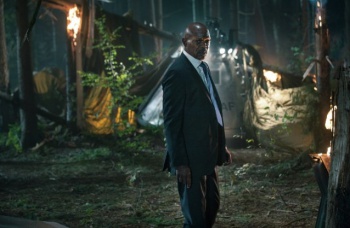 It’s this eye-rollingly stupid plot that is part of the appeal of Big Game, I suppose. It gets even worse once the plot twists start being thrown at us in rapid succession. There’s an audience out there that likes to watch the dumbest action movies they can find, and most of them are either old or direct-to-video. Here’s one with a big-name star and a (limited) theatrical release.

This is the type of movie in which the villain is introduced to us by shooting a man not with a rifle, but with a rocket launcher. Or where the heroes literally stand on a huge rock to have their picture taken – not just for the audience, but in the film’s universe. It knows it’s goofy, and it knows you’re going to be laughing at it, so it plays along. There’s no winking at the camera, but there’s a light tone to the entire production. The line between serious and parody often finds itself getting blurred.

Big Game is stupid, cheesy, and feels like something straight out of the 1980s.

It takes a specific kind of filmmaker to take a premise this silly and handle it straight, but knowing. Jalmari Helander is the director, a name you probably don’t recognize. He was the man behind Rare Exports: A Christmas Tale, a film in which a bunch of villagers get together to kill Santa Claus. That’s exactly the type of mind who can make Big Game work. And while Rare Exports is a more entertaining film based on its premise alone, there’s a good sense of humor present here that keeps it fun, even when there isn’t a lot of action – particularly in its first half.

The action is low-budget and not particularly impressive, although I feel that will just add to the charm for those who are watching Big Game because it’s a stupid throwback action movie. The CGI is bad, the editing tries to hide the low budget – and fails – and it’s ridiculously dumb and cheesy. This is all part of the appeal. Some audience members will inherently hate this, while others will rush out to see Big Game as soon as they possibly can. It comes down to how serious and complicated you like your action movies. 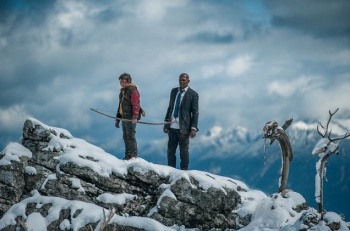 Samuel L. Jackson isn’t often an actor known for subdued acting. In fact, if there’s one person you wouldn’t expect to tone it down, it’s probably him. And yet, here playing the POTUS, in a silly action movie, he does just that. He’s calm, and has a kindness to him. You can believe that he is, indeed, the leader of the United States. That novelty alone might make Big Game worthwhile. Onni Tommila too often has that Jaden Smith-like pained expression on his face, but he grows on you as the film progresses. Supporting cast members include Ray Stevenson, Jim Broadbent, Ted Levine, Felicity Huffman, Mehmet Kurtulus, and Victor Garber. Most of them only get a couple of scenes, and could be replaced by anyone. It really is Jackson and Tommila’s film.

Big Game is stupid, cheesy, and feels like something straight out of the 1980s. It’s not awful. It’s a throwback actioner that knows it’s not the smartest fish in the sea, and therefore doesn’t try to be. It plays to its strengths, which are its sense of humor, its silliness, and Samuel L. Jackson. Some will hate it because of what it is, while others will absolutely love it for the same reasons. It’s the type of late-night movie you watch with friends and have a good time poking fun at it.

Bottom Line: Big Game is a dumb action movie that’s knowingly dumb and hopes you’ll have some fun with its ridiculousness.

Recommendation: If you like dumb, low-budget action movies, either unironically or to make fun of, Big Game will be worth your time.