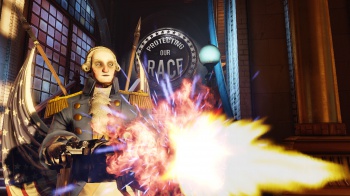 Bioshock Infinite is the first game from developer Irrational Games since the original BioShock title. And, as the television ads have firmly hammered into all of our skulls, that adventure remains the highest-rated first-person shooter of all time. So what more can its spiritual successor do than attempt to emulate an already winning formula? Well, a lot, as it turns out.

Far from the watery walls of Rapture, Infinite takes place high in the clouds, in a floating cityscape called Columbia. Founded by a single man – Zachary Comstock – the city is a bustling setting unlike anything we’ve previously seen from the series. As Booker DeWitt, you take to the skyward state in search of a young woman named Elizabeth. Precious few details are offered upfront, but it’s clear from the start that finding and rescuing the imprisoned damsel will allow you to skirt an unspecified debt.

The story is at once original and enthralling, and the twists and turns that it throws at you are beyond mind-bending. Many games struggle to even piece together a coherent narrative, but Infinite weaves a tale so complex, yet gripping, that it may sour you on other titles for many days to come. It is, without a doubt, one of the most carefully crafted videogame narratives of all time, and you’ll want to embark on an immediate replay as soon as the credits roll.

Comstock fancies himself a prophet, and this mindset has rubbed off on the majority of Columbia’s inhabitants as well. Your quest quickly puts you on the wrong side of both Comstock and the city’s security forces, and before you know it you’re blasting foes with both firearms and supernatural abilities called “vigors” – akin to the plasmids from the first two BioShock titles. As always, combining the vigors with well-timed physical attacks makes for a fantastic one-two punch, and besting a squad of bad guys by yourself is immensely satisfying.

You’ll have plenty of opportunities to try out both new guns and pseudo-superpowers throughout your journey, and while you may run low on offensive weapons from time to time, scavenging the battlefield will almost always turn up plenty of ammo and salt – the material required to use vigors.

Like plasmids, the vigors vary in their usefulness and can be used either in a purely offensive manner or set up with defense in mind, buying you a few precious seconds when enemies close on your position. Also aiding you in your fight is the inclusion of wearable gear – four different slots in total – that can be used to complement your play style. This gear is usually found in out-of-the-way places, so exploration is encouraged. The addition of gear adds a welcome layer of depth to building Booker to your liking, and the experimentation it allows is extremely enjoyable.

On your journey, you’ll be led through Columbia’s seedy underbelly which is rife with racism, cult mentality, and a population that idolizes government officials as religious figureheads. The racist leanings of certain groups in particular are bound to ruffle some feathers, but in a game that shows the pitfalls of following a certain ideology through to its bitter end, broaching the topic of racial inequality draws a fitting, if unsettling parallel to our own world history.

You’ll navigate Columbia either on foot or via elevated tracks that connect parts of the floating city to one another. Using a handheld contraption called a Skyhook, you can deftly maneuver the sweeping metal rails to cover vast amounts of ground very quickly, or even utilize them during combat by quickly changing positions or attacking your foes from above. This mechanic works absolutely fantastically, and particularly tough battles are made much easier if you’re willing to put your Skyhook skills to the test. 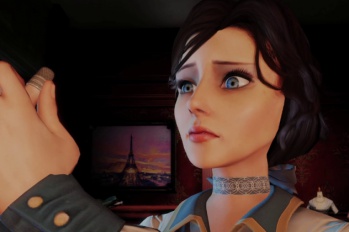 Flying from one floating platform to the next in real time is thrilling, and even if you’re not running from a George Washington-themed, minigun-equipped robot at the time, you’ll still enjoy watching the world whip by. In the later stages of the game, navigating these rails becomes increasingly important, transitioning from a simple convenience to a valuable tool in completing your ultimate goal.

Battles with Columbia’s law enforcement, creepy robotic brutes, and the city’s own automated defenses are made slightly easier once you gain the aid of Elizabeth. While you wage war, she can provide timely ammo and health boosts when you run low, but her help won’t keep you from meeting an untimely end if your trigger finger isn’t up to the task at hand.

If you are worried about Infinite becoming one long escort mission, there’s absolutely nothing to fear here. You never have to actively protect Elizabeth in combat, and she finds her own cover and avoids enemy fire without any input on your part. She may be the object of your rescue mission, but she can definitely stand on her own when it comes to survival.

One of Elizabeth’s more unique abilities – which also becomes a very important plot point in the later stages of Infinite‘s 12-to-15-hour campaign – is her ability to slice open portions of the world itself to access other dimensions. These “Tears,” as they are called, can pull weapons, robotic allies, and other objects into the battlefield from out of the blue. While your greatest asset in combat will still be your own ability to strategize, Elizabeth quickly becomes an integral part of the attack plan, and her abilities manage to strike a perfect balance of helpfulness without feeling overpowered or cheap.

As the tale progresses, you’ll find yourself on several different sides of many different fights. Whether it be a war waged due to racism, class inequality, or religion, you’ll always be given a good reason to take up arms and hope your allies come out on top. This isn’t to say you’ll agree with every single turn the story takes, but at the very least you’ll understand why each plot point plays out as it does.

Telling you any more about the story would not only spoil large portions of the game for those who haven’t yet played it, but for a title like Bioshock Infinite, it would be a crime, plain and simple. Suffice it to say that when you finally reach the end, you’ll look at the entire adventure in a totally new light.

Bioshock Infinite is both a breathtaking achievement in videogame storytelling and a marquee example of a game that will stick with you long after you see everything it has to offer. Calling it simply a first-person shooter is practically an insult. If you can make it through the game without being emotionally affected – or even experiencing a bit of an existential crisis – you need to check your pulse immediately.

Bottom Line: An instant Game Of The Year contender – and, at this point, favorite – Bioshock Infinite is in a class of games that only come around on very rare, very special occasions. It combines fantastic action with a story that will evoke every emotion you have to offer, and leave you wanting even more. This is as close to perfect as videogames get.

Recommendation: There’s practically no reason to pass this one up. If you want to be included in a conversation that is bound to take social networks and games forums by storm, you have no other choice but to experience it, and enjoy every second of it.

This review is based on the PC version of the game.

DuckTales Remastered Will be “Significantly Easier”