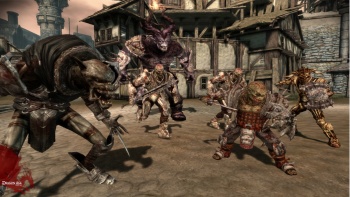 BioWare co-founder Ray Muzyka believes videogame development is an art form that requires an element of risk for innovation.

The videogames as art debate is one that’s raged in recent times and I think the conclusion was that videogames are whatever we want them to be. I say let’s allow the creators to decide. In the case of BioWare’s Ray Muzyka, videogames are definitely art, but they’re a risky form of it.

Muzyka told VG247: “We want to… push the idea that games are art, and that art requires a little bit of risk to innovate. It’s hopefully what allows us to do something that’s always going to be fresh and different for our fans.”

BioWare takes risks on its projects to make better games for the people that play them. Muzyka believes that the risks associated with innovation are worth it to give gamers new experiences. “I think we’re taking a crazy number of risks on all our projects, and that’s for the fans,” he says. “We do it all for our fans at the end of the day.”

On the other hand, BioWare doesn’t jump off a cliff without a parachute all day long and hope to land in the swimming pool. The risk during development must be properly managed to not spiral out of control. Muzyka admits: “We’re also trying to constrain risks on all of our projects at the same time, because it’s about making sure that we can deliver a game at quality and a certain target of feature-set and scope. It’s always a balance, right? But we’re definitely ambitious in the way we approach our game-building.”

Look at it this way. If a five-year-old creates a finger painting, mother will still put it up on the fridge even if it’s terrible. However, if BioWare’s art is deemed terrible, people could lose their jobs and millions of dollars go down the drain.

I’m glad I only write about the things these guys say and am not the one responsible for the budgets of multi-million dollar blockbusters. It’s got to be tough to figure out exactly what features of lengthy games like Dragon Age need the funds and manpower and which don’t, especially when those games are really expensive.

Marshall of the Legion