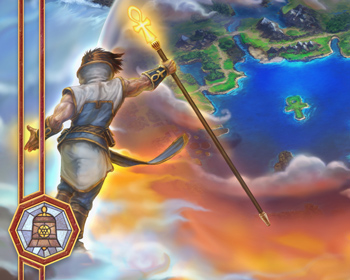 “The first great Western RPG has been lovingly restored in Ultima Forever.“

EA just announced that BioWare is working on a cross-platform, modern take on Richard Garriott’s ground-breaking Ultima series. It’s not quite what you’d expect, at least from an Ultima title. Ultima Forever has a bright, cartoonish aesthetic, only two classes and it’s being published under EA’s Play 4 Free label.

“Accept the challenge from Lady British and save the land of Britannia. Play as the Fighter or the Mage and travel alone or with friends, restore virtue and become the Avatar!” shouts the game’s announcement page.

Lord British appears to have either been replaced or undergone sex reassignment surgery, presumably because he (Richard Garriott) is unlikely to be involved with the project. EA obtained the rights to the Ultima series back in ’92 when it bought Origin Systems. Garriot eventually left the company at the turn of the century, shortly after EA canceled all of the studio’s projects in response to the poor performance of Ultima IX. EA finally shuttered the studio in 2004.

You can take a look at Ultima Forever‘s artwork and sign up for the beta here.