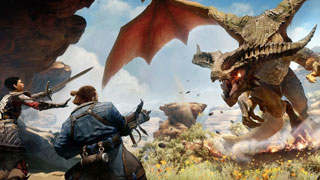 It sounds like the Dragon Age team is ramping up for a sequel to Inquisition.

Let’s be honest: We’ve all been expecting a sequel to Dragon Age: Inquisition for a while. While some rumors have bounced around, there’s been little in the way of official confirmation. That changed on this weeks’ episode of The 1099 Podcast.

On that episode, Dragon Age creative director Mike Laidlaw said that “something is happening with Dragon Age.” He didn’t offer specifics about what that “something” might be, but he did go on to confirm that the Dragon Age team at Bioware is “hiring a lot of people.”

Laidlaw also vaguely mentioned that Bioware was working on “other things” as well. “There are other things in process but unfortunately I can’t talk about them until they are realized. I am pretty excited about a few of them. Things continue apace,” he said. “As I’ve jokingly said, I am the creative director for the Dragon Age franchise and they haven’t fired me yet.”

When it launched, Dragon Age: Inquisition sold fairly well, in fact, it was the most successful launch in Bioware history at the time. Despite some problems with the PC controls, it went on to win several Game of the Year awards. So it should be no surprise that there’s a new game in the series being made.

There are still no specifics, but if you’re a Dragon Age fan, you definitely have something to look forward to.

Grab These Flexible Toy Block Sets in Multiple Colors for Just $24.99 Each