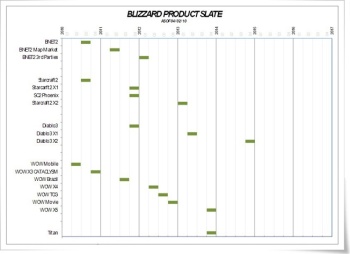 Rumors about a leak of Blizzard’s long-term launch schedule are looking just a wee bit more solid thanks to the sudden resignation of the general manager of Blizzard China for unexplained reasons.

MMOGameSite.com caused a stir last week when it published what was claimed to be Blizzard’s launch schedule all the way into 2014. Along with release dates for known games like the future StarCraft 2 chapters and Diablo 3, it also purported to reveal heretofore unheard-of titles like StarCraft 2: Phoenix and something called Titan. Blizzard responded with the usual “no comment on rumors and speculation” and most of us immediately blew the whole thing off as a hoax because there’s just no good reason to believe it. Why would Blizzard, which still hasn’t announced a release date for Diablo 3, commit on paper to having the second expansion ready for the end of 2014?

And yet, and yet. A couple days after the alleged leak it came to light that Ye Weilun, the general manager of Blizzard China, resigned unexpectedly and was quickly replaced by Dai Jinhe, formerly the sales director of Nokia China. The official Blizzard position is apparently that the two events are unconnected but his resignation is unsurprisingly adding fuel to the rumor fire. MMOGameSite also reported that Blizzard CEO Paul Sams is expected to arrive in Shanghai this week and that staffing changes may follow in his wake.

A release schedule that looks a half-decade into the future can easily be dismissed as speculative but it was later reported that the leak also included more salient data like subscriber numbers, revenue, advertising budgets and media plans, all of which are far more sensitive than the possibility of a new Battle.net “map market” showing up in the middle of next year. And it all remains pure speculation, albeit speculation with a little more momentum thanks to the departure of Ye. In other words, I’m still not buying it, but I’m also going to pay a little more attention to what happens next.

Superheroes and the State of the World