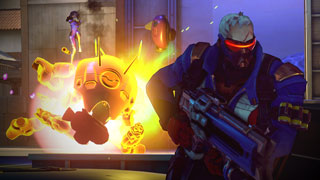 Blizzard may soon implement policies that punish habitual leavers in Competitive with permanent bans from the mode.

If you’ve played any competitive Overwatch, you’ve likely seen people who bail on matches when things aren’t going their way. Many games punish players who leave early, and one Overwatch player suggested in the game’s official forums that Blizzard should borrow Street Fighter V‘s system, which tags leavers with a red label, and only lets them play with other leavers for a set period of time. But Blizzard is working on something a bit more punitive, it seems.

Overwatch Game Director Jeff Kaplan responded to the thread, as he is wont to do, and he outlined a new policy that Blizzard is working on to try and encourage players not to leave matches early. He said,

“We’ll definitely take the idea into consideration. Our philosophy has been that we would rather not have leavers playing the game at all (especially in Competitive Play). We keep increasing the penalty for leaving and will continue to do so. We’re in the process of implementing a new policy which would take into account how many Competitive Seasons you have been banned from and at a certain point, prevent you from playing Competitive ever again.”

So if you like to leave matches early, it could end up getting you banned from Competitive Play for good. I’m sure that sounds reasonable to anyone who’s been hamstrung in a match by someone who bailed out early.