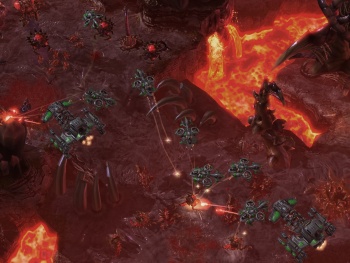 Weeks of smack talk came to an end this weekend when Keane Ng and John Funk finally met in battle in StarCraft II‘s multiplayer. Did Keane emerge triumphant once again, or did Funk get his sweet, sweet revenge?

Funk and I have been working hard at BlizzCon 2009, but we’ve been playing hard as well. No, we didn’t go to any crazy room parties full of Blood Elf female cosplayers (in my dreams, fellows), this was some serious business: StarCraft II‘s multiplayer.

If you guys remember, earlier this year I defeated Funk to claim first place in The Escapist’s Street Fighter IV showdown. Since then he has been looking for a chance to redeem himself. Being a huge Blizzard fanboy, he naturally saw his chance in StarCraft II. So I humored him. We did a best two out of three series of StarCraft II 1v1 matches at BlizzCon this weekend. Here’s how it went down.

Keane: You can’t be good at everything in life. I’m good at quite a few things – Street Fighter, origami, eating noodles – but occasionally I’m forced to realize that there are some things I just can’t do well. One of those things, unfortunately, is playing real-time strategy games.

I have never beaten the first StarCraft. I hadn’t even been able to get past the first two levels until last year. My mind and my hands aren’t made for “micro” and “macro,” unless you’re talking about making instant macaroni and cheese in the microwave. So I have to give Funk credit for striking me right in my weakspot. He did good. But I didn’t go down as easy as I had feared I would.

The first game was a travesty. I spent the entire time holed up in my starting base, not expanding, just trying to remember the Terran tech trees. Uh, how do I make tanks? How do I make planes? When Funk showed up with units other than marines, I was just thinking “What the HELL is that thing and how do I make it?” Halfway through I was ready to lose. But no. Funk had to savor it. I didn’t see a single attacker for ten minutes, and then it hit: a massive assault capped off by a nuke going off in the center of my base. It was humiliating.

I learn quick, though. The second game was different. Much closer, mostly because I actually expanded to have three bases and a decent handle of producing troops and maintaining resources. I expanded right next to one of Funk’s areas. He didn’t seem to notice. But when I set my Siege Tanks to Siege Mode and they started firing – I did not want this to happen – my position was given away.

Winner’s Statement: The original StarCraft has a well-deserved reputation as one of the most balanced multiplayer games ever made, and while SC2 probably needs a bit more work, it’s getting there. So, see what happens when Keane can’t rely on tier-whoring? Yep, that’s what I thought.

I will give Keane credit, though. I may have utterly destroyed him in the first game – dropping six Medivacs’ worth of Marines, Marauders, and Siege Tanks in the undefended back of his base and having a Ghost call down a nuclear strike to deliver the coup de grace – but he learned quickly. In our second game, he expanded, set up a secret base right outside of my rich-mineral expansion, and supported his anti-air turrets well with a wall of Siege Tanks that made approaching him tricky.

But he forgot to defend his rear flanks, and once that forward base fell, he had nothing to slow the advance of my Immortals, Stalkers, and Colossi except a Bunker or two – imagine a relentless storm of alien walkers with pew pew lasers burning swathes through a human colony, and you’ll have something kind of what it looked like. The Mothership was only the seal on the deal.

He learns quickly, and if we play again, it might be even closer. But beat me?

Sorry, Keane. No chance in hell.