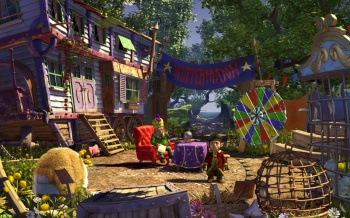 Early on in The Book of Unwritten Tales (PC, Mac), a gremlin begs your help with an important mission. He’s found something that could end the war and change the world’s fate, but he’s been captured by the forces of evil. Reaching through the bars of his cage to press a ring of power into your hand, he begs you to take on the quest for the book in which the gremlin has left information about this oh-so-wondrous world-changing item.

Before you turn away in disdain from this overly trite plot, there’s one more thing you need to know: The gremlin’s name is MacGuffin.

The Book of Unwritten Tales is acutely aware of how many RPGs seem to be trope-by-numbers affairs, and lovingly pokes fun at the conventions that have become so typical of the genre. Mechanically, it’s a point-and-click adventure style game, but its story, setting, and characters are pulled right from the RPG handbook, offering dwarves, elves, dragons, gnomes, wizards, warriors, an unwinnable war and a world in constant turmoil. Though you’ll play as a handful of different heroes across your adventure, my personal favorite is Wilbur the gnome, who doesn’t quite fit in with the other gnomes because he’d rather do magic than make machines. He’s a great stand-in for the player, recognizing the silliness of his trials while still managing to get caught up in the excitement of completing them.

The puzzles themselves aren’t overly obtuse, favoring exploration and observation over excessively overwrought design. They also tend to make real-world sense (or as much real-world sense as something in a fantasy setting can), which shifts the focus from just trying everything in your pockets on every possible hotspot to reflecting on what you’d do if you were actually there. Don’t think too hard about what might distract the monkey, for example, just start searching for a banana. Not everything will be available your first time through an area, either; you’ll have to take your time talking to characters and looking quite closely at everything. Some may consider this needless backtracking, but it helps deepen your connection to the world and the characters in it, because you actually have to pay attention to what their wants and needs are, as opposed to just cycling through their dialogue as fast as you can. It also lessens the typical adventure game frustration of having a whole bunch of junk in your pockets before you have any reason to use it. There’s some of that, certainly, but the clues and items are measured out in such a way that you never feel like you’re being handed answers or pointed in the wrong direction.

That attention to detail extends to The Book of Unwritten Tales‘s writing, which is clever, self-aware, and genuinely funny. It doesn’t just give a wink and a nod to RPGs, – you’ll spot references to everything from Titanic to Indiana Jones to MMOs and The Lord of the Rings. The game never clubs you over the head with its humor; it’s there for you to notice if you’re paying attention, but if you’re not – or if you simply don’t get the reference – you won’t feel like a rube for not laughing along. Not all of the game’s chuckles come from in-jokes, though. The mummy in MacGuffin’s study is one of the funniest game characters of recent memory, and everyone who plays should make a point of examining Wilbur’s chair very closely. None of the jokes feel forced, and most importantly, they never get in the way of the actual story. They work in service of the plot, not in place of it.

Sharp writing can be appreciated even when it’s just text, and The Book of Unwritten Tales could’ve gotten away with presenting the game’s copious dialogue as just subtitles, but developer King Art decided to go all in on the voice acting instead. Even minor characters are portrayed with panache, and much of the dialogue will remain etched in your memory long after you’ve finished playing. This is quality stuff, gang.

Its gameplay is simplistic, but The Book of Unwritten Tales makes up for it by having really lovely stuff to look at. Exploring a scene isn’t about running your mouse around, waiting for your cursor to change, but rather just soaking in the detail. A lot of what’s there is thrown in just for flavor and laughs, but you stop being able to interact with objects once they’re no longer relevant. Narrowing down the interactivity makes puzzles a bit easier, but it’s a fair compromise between the atmospheric benefit of jokey red herrings and the frustration that too many options can cause. Your overall task might be a bit easier, sure, but your journey is way more fun.

Bottom Line: If you’re going to try and woo a modern gaming audience with old-fashioned gameplay, you’d better be pretty special. The Book of Unwritten Tales is. It’s smart, funny, well-crafted and has tons of heart.

Recommendation: Wilbur Weathervane et al will steal your heart and make you smile. Grab this.