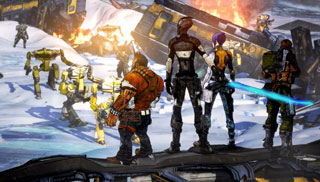 During their PAX East panel over the weekend, Gearbox Software confirmed that they are indeed working on the next Borderlands game.

At PAX East this past weekend, Gearbox Software confirmed what pretty much everyone already knew: they’re working on another Borderlands game. The company’s CEO, Randy Pitchford, was straightforward about it, stating, “It’s no secret, obviously there’s going to be another Borderlands.”

Scott Kester, who was the art director for Battleborn, will fill the same role on the new title. Mikey Neumann, whose title with the company is Chief Creative Champion (and who also voiced Scooter, one of the most recognizable characters), will take on the writing duties once again.

Pitchford also mentioned that Battleborn already contains a number of Borderlands easter eggs, and even teased a few additions from the new game, saying, “So what if we put easter eggs for future stuff in the DLC?”

Obviously, there’s no word on when the game might come out, what platforms it might be on (though you can probably assume that with Microsoft ceasing production on the Xbox 360, last gen consoles will be left out), or what the story might be. That said, if the previous Borderlands titles are any indication, it’ll definitely be worth the wait.

Blind Preview – Now You See Me