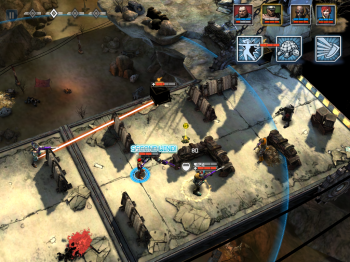 2K Games and Gearbox Software, not content to keep their explosions constrained to consoles, are officially bringing their popular Borderlands franchise to mobile devices. The original four Vault Hunters will make a return for Borderlands Legends, which is set to debut for iOS on October 31. Don’t let the familiar faces fool you, though: this old skag has learned a few new tricks.

According to Entertainment Weekly’s first look, Legends will bring a number of changes to the classic formula of shooting people and taking their stuff. Most notably, the shift to a mobile format brings with it a shift in perspective – Legends will be played from an isometric top-down point of view. Additionally, all four Vault Hunters can be controlled simultaneously, allowing tactical players to synergize their skill sets for maximum carnage.

Despite the departures from the norm, this is still a Borderlands game, and that means lots of guns and plenty of nasty things to use them on. Classic enemies like skags, spider ants, bandits, and Crimson Lance soldiers will all be doing their best to stop you from completing your next objective. Speaking of objectives, missions will be randomized, ensuring an endless supply of sweet, sweet loot. Don’t worry about hitting the level cap, either: characters will be able to level endlessly, with enemy difficulty scaling up to match. The lovable arms dealer Marcus will be along for the ride as well, selling an assortment of randomized weapons.

With a mission-driven approach and a whole new style of gameplay, Legends may turn out to be a good deal more strategic than its run-and-gun console predecessors. Each playable character will have three action skills at their disposal (rather than being limited to one as in previous games) as well as six passive abilities in their personal tech tree. This breadth of options, along with a new cover system, should lend the game a sense of strategy that would otherwise be lacking in a standard shooter.

Borderlands Legends will arrive, guns blazing, on October 31. If you’d like a little slice of Pandora for your own iOS device, you can pick it up for $4.99 on the iPhone, or $6.99 on the iPad.