The new film Battleship shares its title with a famous board game, but other than that they have no actual connection. It’s not so much an “adaptation” as it is “branding,” a way of using the omnipresence of corporate brand identity in everyday life as a way of connecting to audience familiarity.

And guess what? It’s not even close to being a new idea. Here are five movies where branded products weren’t just part of the scenery, but part of the story.

Product: Winn-Dixie
In this particular case, the branding aspect only actually made sense if you lived or spent time in the American South where Winn-Dixie is a popular chain of supermarkets.

The film, based on a children’s book by Kate DiCamillo, is a whimsical small-town fable about a little girl who makes new friends and helps emotionally withdrawn adults, including her father, come out of their shells with help from a plucky stray dog she adopts and names after the titular store where she discovered it. The movie and book don’t really actively promote the Winn-Dixie corporation, though obviously the whole storyline is itself a cute-ified demonstration of the pervasiveness of branding, e.g. why not name your pets after the place you shop?

Where The Heart Is

I almost feel bad putting this on here, because it means someone might be tempted to actually watch this. Please don’t do that.

Natalie Portman stars as a pregnant teenager whose loser boyfriend abandons her in a Wal-Mart. With nowhere to go, she figures out how to effectively live in the massive big-box store, mingling with shoppers and employees by day and hiding out by night. She makes important life changing new friends in the store and even gives birth there, becoming a media sensation as “The Mother of The Wal-Mart Baby”. There’s a lot of quirky Southern Gothic melodrama in between there and the finale, but the main recurring thread (it was even in the trailer) is implicitly that Wal-Mart is so comprehensively stocked you can (literally) live an entire life off it.

Setting aside the unmitigated schlock of the movie itself (Rural south, you say? Populated by offbeat people whose deep personal wounds manifest in delightfully quirky ways, you say?), it’s just shy of galling to see Wal-Mart, an institution infamous for blighting small communities by crippling local industry, being held up as a kind of present-day equivalent to the Town Square, i.e. a hub of neighborly bonding and community strength.

Born in 1927, the Radio Flyer Red Wagon was one of the first iconic mass produced children’s toys so ubiquitous in the memories of generations of people that its name and logo alone are capable of stirring powerful childhood nostalgia, a near-universal shared experience memory of more innocent, more carefree days.

So, of course, it makes perfect sense to use said name and logo as the title and visual touchstone of a movie about surviving constant, brutal child abuse. Right?

The film concerns two brothers (Elijah Wood and Joseph Mazzello) who use imagination and exploration adventures to avoid/cope with the violent beatings meted out by their alcoholic stepfather. Their ultimate scheme, inspired by a local legend, is to retrofit their Radio Flyer wagon into a makeshift airplane by which the younger brother (target of the most abuse) can escape for good. So, if you ever wanted to know what The Wizard would be like if it was about much older toys and was unrelentingly depressing, here ya go. 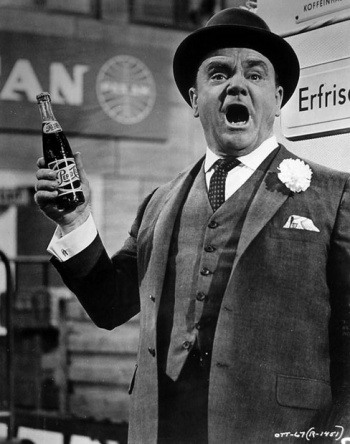 I don’t get nearly as many opportunities to talk about classic (pre-70’s) movies, especially non-genre movies as I’d like to, but here’s a good tip: If it was written and/or directed by Billy Wilder, watch it. Wilder basically invented the modern American movie comedy (though he made many stone cold classic dramas, as well). He pioneered the combination of increasingly complicated comic situations and smart, fast-moving, consistently witty (as opposed to setup/punchline-driven) dialogue that fused the best aspects of cinematic and theatrical comedy.

Released in 1961, One, Two, Three is a political satire reworking of Wilder’s own 1939 screenplay for Ninotchka, with James Cagney (in what would be his last leading role and his last role, period, before his subsequent 20 year retirement) as a harried Coca-Cola executive transferred to Berlin as part of a scouting operation to possibly introduce the Great American Soft Drink to the Soviet Union. He’s a fast-moving, multitasking master schemer, but his plans are thrown into turmoil upon discovering that his boss’s feisty teenage daughter (whom he’s been ordered to chaperone, among his other duties) has fallen in love with a proudly Communist East German man (the Berlin Wall actually went up while the film was shooting in Germany, so the story is set before its construction) and they are about to defect to Moscow. Our hero must put his business skills to the test in manipulating the young couple, his business associates, his own family, his boss and even the East German Secret Police in order to make sure everything works out alright and that no one ever finds out what almost happened.

While it’s not exactly cynical by today’s standards and ultimately comes down (however humorously) on the side of American pop culture exports as a force for capitalist do-gooding, the film gets off a good deal of gags at the absurdity of the omnipresence of the Coke brand in the American psyche. Amusingly, rival soda Pepsi also gets some sly shout-outs (including a terrific final joke) inserted by Wilder as a favor to his friend Joan Crawford, who had recently become part of Pepsi’s board of directors.

Okay, this is the first time I’ve put a movie on one of these lists that I haven’t actually seen (it isn’t widely available in the U.S.). It’s on here because A.) it’s a unique example of the subject at hand and B.) I have seen the relevant part.

First unusual thing about this movie? It’s French, but since it’s not actually about what the title seems to imply (explanation incoming) it was retitled Le Petit Amour in the United States, meaning that its American title is French but its French title is English.

Second unusual thing? It’s called Kung-Fu Master! because its plot heavily revolves around the Kung-Fu Master! arcade game. Yes, the one you’re thinking of. The main story is that of a taboo flirtation between a middle-aged woman and a troubled 14 year-old boy whom she develops complicated romantic feelings for. Said boy is an obsessive player of Kung-Fu Master!, and she becomes closer to him in part by seeking out locations where the game is installed.

It’s kind of incredible to think that a game company actually approved the use of their product in a film with such touchy subject matter. According to people who’ve seen the whole thing, the idea is that the game’s archetypal “ascend-through-levels/get-the-girl” setup is supposed to be a metaphor for the kid’s journey into manhood and, when you think about it, it’s really incredible that no other movie would make that seemingly obvious connection for almost three decades.

Speaking of being ahead of its time, the film opens with the boy in question acting out the character animations of the game on a street, (clip semi-NSFW) complete with authentic music and sound effects. Unless I’m forgetting something else, this may in fact be the first “game-in-live-action” skit ever filmed.