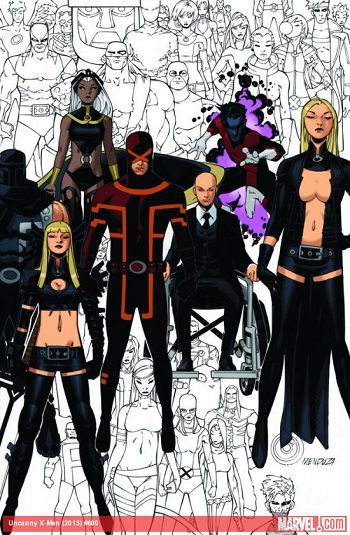 Marvel Comics is delaying the release of Uncanny X-Men 600 to avoid to stepping on Secret Wars’ toes.

Brian Michael Bendis is kind of a big deal in the comic book world. The writer behind a variety of popular and influential series and, for some years now, has been an influential force at Marvel Comics where he’s created and headlined a number of prominent series including Ultimate Spider-Man, Guardians of the Galaxy and the X-Men books. Up until recently, Bendis had intended on ending his work on Marvel’s major X-Men titles with Uncanny X-Men 600, a giant-sized issue that been planned for release this month. According to a recent Tumblr post from the author however, X-fans looking forward to the comic will now have a few more months to wait.

Responding to a reader question, Bendis confirmed that the book’s release has been pushed back to October. The decision, he indicated, was one that fans could lay firmly at the feet of Marvel. “It was bumped until after Secret Wars for editorial and commercial reasons,” he said. “Not my call. This was Marvel. But they have their reasons.” He would go on to say that the book “has been written” and “could easily ship this month.” That being the case, he promised that the delay would “not effect the story or the impact of the story” and tried to comfort comic readers by assuring them that “there [are] a lot of comics to read” and that they “will not be bored.”

The question that emerges from this is how Uncanny 600 will fit into the new combined universe that’s supposed to be the end result of the current Secret Wars event. Since it was originally intended to release this month, it would make sense that the comic would either take place before Secret Wars or have some connection to it. Its new October release window however, will see it hitting store shelves well after Secret Wars has ended. Suffice it to say that we’ll be interested to see how well it meshes with the Marvel universe as it exists five months from now.