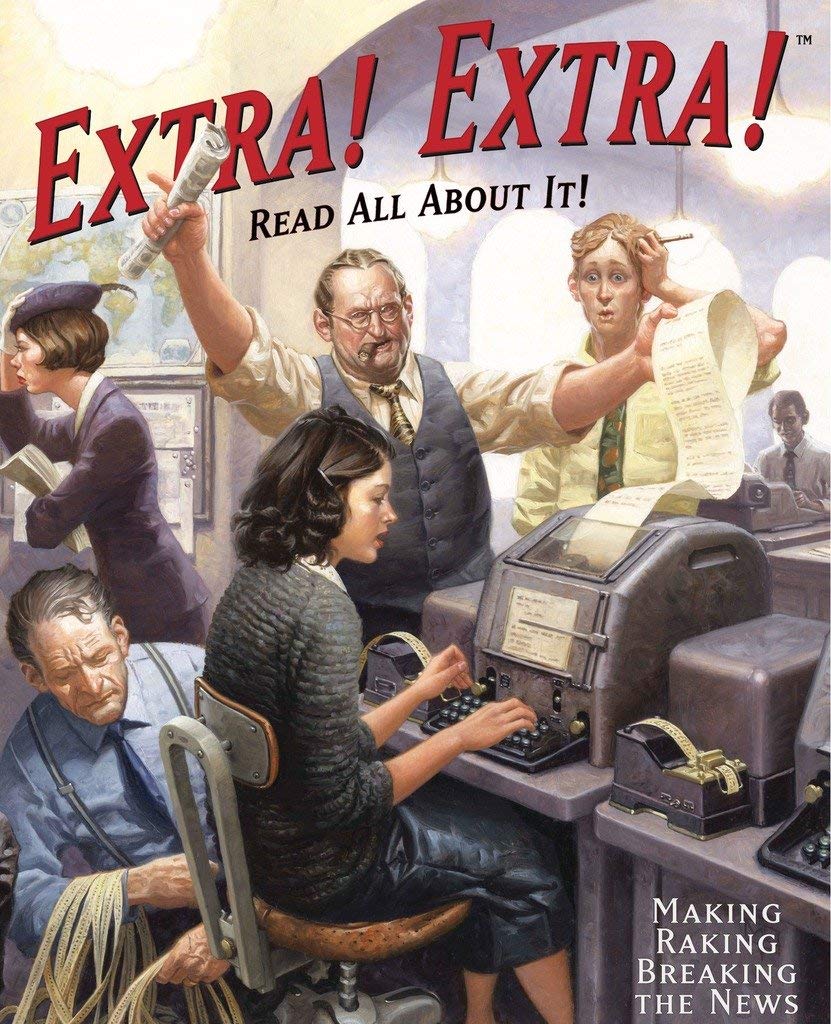 The American media landscape is kind of a mess right now with newspapers going through a cycle of buyouts and budget cuts, local news stations facing consolidation, and even big television networks feeling the squeeze from streaming services. This capricious and competitive industry provides the perfect fodder for games where you can imagine every struggle played out without upending real lives.

Mayfair Games’ Extra! Extra! replicates the experience of running a newspaper in almost painstaking detail. Each player controls a publication with a different specialty such as politics and business, and they’re rewarded for keeping content in line with what readers expect. Your goal is to fill your front page with a mix of articles, pictures and ads, though the space you’re working with varies depending on how long and hard you want the game to be. Keep it easy and you just need to complete a tabloid. Experienced players can opt for a traditional broadsheet.

The game is packed with this sort of lingo that might be baffling to players who haven’t gone to journalism school or worked at a newspaper but filled me with a nerdy glee. Stories are sized based on column inches and must be laid out on the page like a puzzle. You acquire components by dispatching reporters to interview sources but can also raid the morgue, the old term journalists used for folders filled with previous work that might prove useful again. The goal is to have the most “circulation points” at the end of the game, indication your paper has the largest reach. I like to think my experience gave me an edge over the other players, particularly when it game to arranging stories since I’ve actually done page layout and didn’t have some of the planning struggles others seemed to have. But honestly anyone really good at worker placement board games can grasp the concepts needed to succeed in Extra! Extra! Even if they might just dismiss clever references for standard game jargon.

The race for breaking news lends itself particularly well to the worker placement genre, which typically rewards players who get to a given space first. In Extra! Extra! players compete for sources, placing reporters on spaces representing various news bureaus to gather material for their papers. Each player has one board where they place their stories and manage their budget and then they share a set of boards with tiles representing the path a story takes from reporters leaving their desks to interview sources, to delivering copy to editors, to those stories being typeset and placed on the page. When a reporter is placed, the player chooses how much money to invest in them and can be bumped out if someone is willing to pay more. It’s kind of a little symbol of how it might be tempting for publications to cut costs but it can badly hurt their bottom line in the end if they cease to produce relevant stories. You gain income from selling ads but don’t want to fill your paper with too much of those because they’re not worth any points at the end of the game. But having more money means you can hire more reporters and try to dominate the field, creating a delicate balance between costs and content.

We just played through the introductory scenario and there are many more rules that can be added in to make the process more realistic and complex. You could have to design not only a front page but a center spread, be able to hire stringers to support your staff reporters, and have to deal with breaking news that can disrupt your coverage plans. You can also require players to make room on their pages for headlines and add in copy editors who will help make sure everything works together. Adding these in turns on different areas of the game board and introduces a variety of new tokens making each decision more complex. I’m hoping I can play again sometime soon and see if my experience really helps me handle the more advanced modes.

Insider knowledge is a lot less likely to help you in Formal Ferret Games’ The Networks, which substitutes industry jargon for gags that avid TV viewers are sure to appreciate. Much like with Extra! Extra! players are trying to have the biggest audience for their business by the end of the game. In this case they’re building a lineup of evening TV shows by drafting them from the center along with ads to pay for them and stars to make their shows more popular. Every show has a time slot it will do best in during its first season and many of the ads and stars also have stipulations so that a career stuntman will be worth more if he’s on an action show while the biggest ads can only be placed on sports programs. You also gain bonuses for programming blocks with the same type of content. That means you’ll have to carefully strategize when building a lineup to make sure things work while keeping an eye on what other players are drafting to try to avoid unnecessary competition that will hurt both of you. I don’t have any experience working for a television studio so I couldn’t say if this process is accurate but it seems like a reasonable simulacrum of the challenges that must go into planning a night of television meant to keep viewers glued to their screens and not changing the channel.

Shows age at different rates, with some starting off with just a cult following but growing in popularity while others fall off steeply. The trajectory typically mirrors the show they’re spoofing so “Dextrous” gets three strong seasons before dropping off a cliff while “Broken Worse” starts off with a relatively small audience but turns into a smash hit if you keep it going for three seasons. Deciding when to cancel and replace shows is a key component to success, made more complicated by the addition of special cards in later round that you can draft to do things like spin off shows to keep a star around even once their program is cancelled or create a split season to get credit for the same show twice. Shows also go into reruns when cancelled and will often earn more viewers in those slots than they would in bad final seasons. Since the game only goes for five rounds, some shows are better to pick up and nurture early while others are best to rush out near the end. I won the game we played largely by launching “The Limping Treated and Released” at exactly the right time.

Players take turns drafting cards, placing shows directly into time slots and then adding on actors and ads. Once you’re satisfied, you can choose to not take future turns in exchange for some bonus cash and a better draft order in the next round, presumably indicating the advantage that networks have if they get their schedules figured out early and can then spend time promoting their lineup. But I almost always stayed in the game as long as possible, picking up cards my opponents didn’t nab first and setting myself up well for later rounds. I don’t think this is a strategy that will always work because having the chance to first pick a particularly good card might beat out the flexibility I gained from having a large stable of cards to enhance my programming.

Like with Extra! Extra!, you can add complexity onto The Networks to make repeat play more interesting. The Networks: Executives expansion acknowledges that decisions in the television industry are rarely made by purely rational actors and success can come down to balancing the demands of big egos. I haven’t had the chance to try this yet, but I think it’ll add some extra fun and probably disturbing realism to the madness. The business of making television and newspapers might be pretty depressing today, but pretending to be a part of it is surprisingly fun.

Disney’s Deal with EA Is Getting Worse All the Time