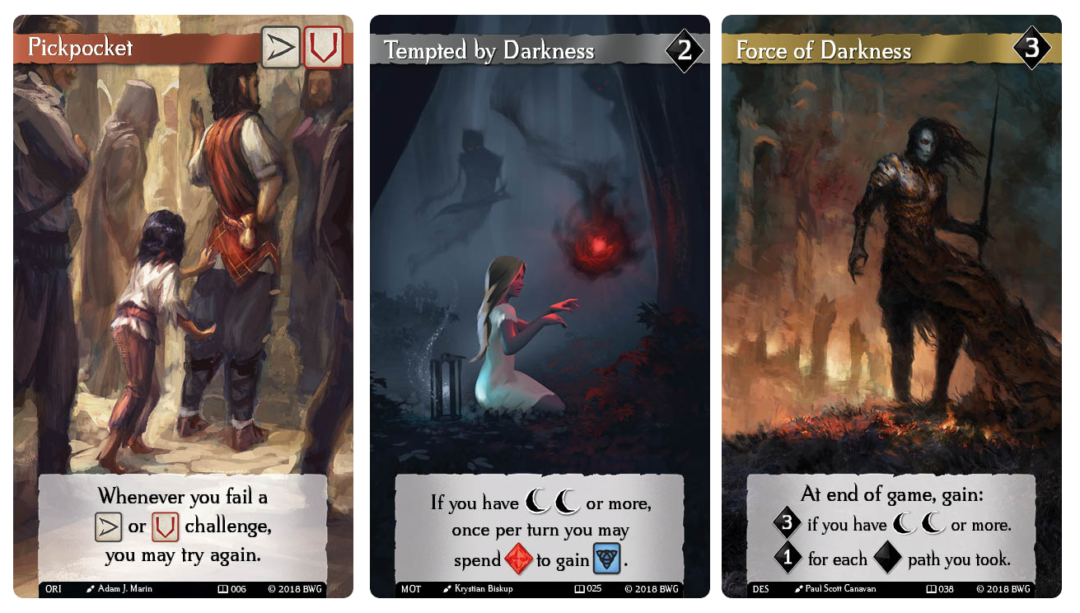 Fantasy is a genre of archetypes and it sometimes seems you can build characters just by stitching them together. There’s the farmer trained by a master who will eventually become a wise master himself. The noble who’s the last survivor of their family destined to embrace the throne that is their birthright. Even villains have their arcs. Everyone’s seen the acolyte driven to despair who eventually becomes a force of darkness. Along their paths they’ll discover truths about themselves, have adventures, and do great and terrible things. The real test of high fantasy is if those archetypal pieces meld together well enough to transform into memorable characters.

Brotherwise Games’ Call to Adventure turns the genre’s worn narrative structure into a competitive game. Up to four players start with an origin, motivation and destiny like those listed above and spend the game collecting traits and going on adventures to best fulfill their goals. The game suggests just dealing out those starting cards randomly, rather than giving each player a choice of two, on the first playthrough but don’t do that. Some of the cards don’t play well together at all and it’s best to learn the rules upfront so no one gets stuck being Pure of Heart, which makes tragic events reduce your point score, while aspiring to be a Hand of Vengeance, who wants to build the saddest backstory possible. We did the random draws our first time through and halfway through the game some of the players realized they’d been crippled by luck.

The game takes place over the course of three acts, with players collecting up to three Story cards from each phase. Traits, like being an Orphan or Rebellious, are free if you meet some requirements from your other cards. Adventures require casting runes, basically a stylized sort of coin flip, to see if you abilities are up to the task. Many cards up your scores in the six abilities found in the d20 system. For instance, being a student increases your intelligence and wisdom, and being brave raises your strength. You get to cast three basic runes on every challenge, but gaining ability cards gets you access to special ability dice that make you better suited to taking on corresponding tasks. Like in 7 Wonders or Splendor, it’s important to build a strong foundation of cards in the early phases so you’re not left without good actions later in the game.

Unsurprisingly, someone who was a student is more likely to succeed at pursuing forbidden lore. The game’s mechanics support the flavor to encourage players to produce stories that make sense. Even though we were competing, we felt a bit like a Dungeons & Dragons party with each character being best at certain types of challenges. Cards with potential overlap, like a demon horde that could be fought with strength or toughness, were often the first ones to be faced to potentially stymie opponents while only the person with wizardly leanings was likely to pursue the Trial of the Magi so they could leave that out to be faced at their leisure. Failing a roll means the card is replaced and you get some experience points, which give you points at the end of the game and are used to activate or acquire some cards. It’s a pretty mediocre consolation prize though, especially in the third act when players aren’t actually guaranteed to get three cards. I actually won our first game because another player failed the challenge on their last turn.

As an extra wrinkle, you get to choose your desired outcome for each adventure, which determines the reward and in some cases the difficulty. For example, you might take on the challenge of being lost in the woods which requires three successes if you just want to escape your pursuers and up your dexterity. Four successes are necessary, however, if you want your journey to lead you to a place of power where you can increase your wisdom and pick up a hero card that can give you an extra point at the end of the game and can be used for a special effect like giving you extra runes on a specific challenge. Which version you pursue will often depend on what attributes you want more of and the destiny you’re aspiring to. These often also equate to moral choices like encountering a force of nature and deciding whether to restore the balance or enslave the forest spirit.

Villains can be just as compelling as heroes if you play right.  Most attack cards can only be played if your character is neutral or evil, while the hero cards that buff your character can only be played if you’re neutral or good. Sitting in the middle of the morality spectrum gives you the most flexibility during the game, but committing to one side or the other earns you points at the end of the game. That can lead to a funny last minute rush to attone or embrace the dark side during the third act. I tended to stick to nice guys because I preferred the effects of hero card to drawing the ire of other players with antihero ones, but one friend played the villain quite well be using his cards to force people to run away from fights or redo challenges at higher difficulties. Each character’s origin and motivation are known to everyone else, though their destiny is a secret. That means it’s hard to guess what a player’s final score will be just by looking at what cards are on the board. It’s still worth paying attention and making some educated guesses to decide when to disrupt them with attack cards.

Designers Chris and Johnny O’Neal offer rules for a co-op or single player mode, but I wouldn’t recommend using them. That version removes all the attack cards used against other players and gives them to an adversary chosen randomly from among the strongest enemies in the game. Whenever the players lose a challenge, the adversary gains XP and if they get too much, the players lose. Certain rune roles will prompt the adversary to play attack cards, but they’re a lot less powerful when not being utilized by a thinking opponent. When everyone’s working together you’re a lot less likely to fail because there’s no incentive to take risks to get a card you really want. The adversary never seemed to stand a chance, which removed all tension from the game.

But when playing against your friends, Call to Adventure is good geeky fun. We enjoyed trying to make sense of the increasingly convoluted narratives people were weaving and particularly teasing the players who were going for villainous roles. Two expansions have already been announced, which will move from the base game’s generic fantasy tropes to incorporate plots and character archetypes from Brandon Sanderson’s The Stormlight Archive series and Patrick Rothfuss’ The Kingkiller Chronicle. I’ll admit I’m particularly excited to see some of those works weirder plot points like “have sex with a faerie queen” and “excised the memories of my dead wife” manifest in card form. It will certainly make for a fun way to dissect two of the most popular current fantasy series and the ways in which they’re original while still calling on archetypes as old as the genre itself.

Spider-Man: Far From Home Trailer Spices Up Our MCU Predictions