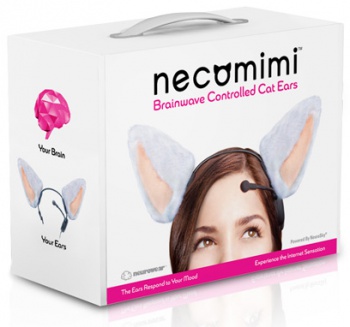 Japanese brain-controlled cat ears have invaded the US.

Generally speaking, animals get all the cool abilities. Gills, bioluminescence, and metamorphosis are just some of the natural perks animals have that make our tool- and language-using abilities look like chumps. Even other land-based mammals, like horses and cats, get those cool rotating ears that can communicate their mood. Last year biosensor company NeuroSky narrowed the gap a little with its set of mechanical cat ears that respond to your mind, but sadly the magic was limited to Japan – until now. Starting today, anyone in the US can pick up a set of Necomimi cat ears for the low, low price of $99.95.

Eager purchasers can obtain the ears from NeuroSky directly or from selected online and brick-and-mortar retailers. The ears will be popping up in a variety of shops, from science museums to Anime- and fantasy-themed hobby stores. Those lucky bastards at Comic-Con – where the Necomimi was unveiled today – get first shot at trying on and buying the ears for themselves.

The ears work using an external neurosensor, which looks a bit like a mic for your brain. The sensor rests somewhat conspicuously on your forehead, then detects your brainwaves via electrical impulses, and possibly also voodoo. There are two basic emotions that the ears respond to; they perk up when the user is excited and droop when they’re relaxed. If the wearer is particularly excited or especially relaxed, the ears wiggle. This partly reflects the ways cats’ ears move based on their mood, and partly is just adorable. Or weird, depending on your perspective.