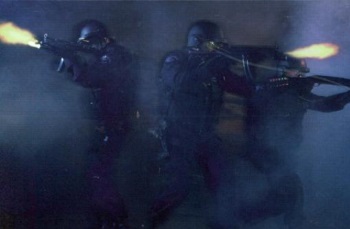 A victorious Call of Duty player was rewarded for his effort with a visit from the local SWAT team after the loser reported that he’d murdered his mother.

Shortly after Rafael Castillo of Long Beach, New York dropped the hammer in an online match of Call of Duty earlier this week, he received a visit from the police. And not just any police: It was the Nassau County SWAT team come a-calling, backed by regular officers – more than 60 in total.

They were responding to a call that purportedly came from Castillo himself, in which he claimed to have killed his mother and was gearing up to go on a rampage. But when they showed up, mom was actually in the kitchen. It turns out that he was a victim of “Swatting” – calling in a fake report of such seriousness that special operations forces are brought in to handle it.

“I thought there was a fire at my house. I ran up and saw my mom running out, I didn’t know what was going on,” Rafael’s brother, Jose, told the New York Post. “Then one of the police officers said somebody called and said that the mother and brother of somebody in this house was killed. I said, ‘How is that possible if she’s right there and I’m right here?'”

It took police about 20 minutes to make contact with Rafael because he was still inside, playing video games with his headphones on. After confirming that it was a false alarm, police said it was likely that whoever placed the call traced Castillo’s IP address to find out where he lives.

“It was probably just an evil little kid,” an officer said. “It sucked up a lot of resources, caused traffic problems. It turned out to be a hoax.”

My sympathy for the police is diminished somewhat by the fact that even though they acknowledged it was a prank, they took Castillo’s computer anyway and presumably went over it with a fine-tooth comb, violating his digital privacy in just about every way imaginable. At the same time, sending a SWAT team on a wild goose chase like this is just beyond stupid; these guys go in hard and have a way of shooting at things that twitch the wrong way. Fun is fun, but sending in a paramilitary squad armed with automatic weapons is way over the line – which makes it even more alarming that it happens often enough to have its own name.

The New Sin City 2 Trailer Is The Hammiest Thing Ever

DC Provides a Peek Into the Future of Future’s End