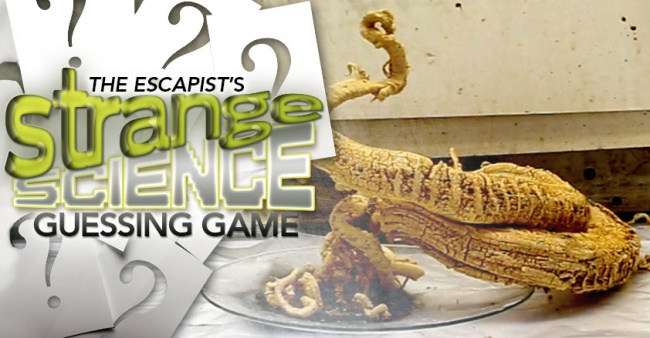 Welcome to The Escapist‘s Strange Science Guessing Game, where we highlight the weirdest sights you’ll ever see in this bizarre universe of ours. And as always, there’s so much strangeness to cover. Here you’ll find absolutely insane pictures we have no frame of reference for, or seemingly ordinary pictures housing an unusual secret.

As before, here are the rules. Each page will introduce a strange picture taken from some realm of science – but with absolutely no context. Your job is to try and figure out what it is. Once you’ve figured it out, or decide to give up, click forward to the next page and see if you got it right. If you manage to get all five correct, you can rest easy in the knowledge that you’re either an erudite student of science, or someone who spends way too much time on the internet. 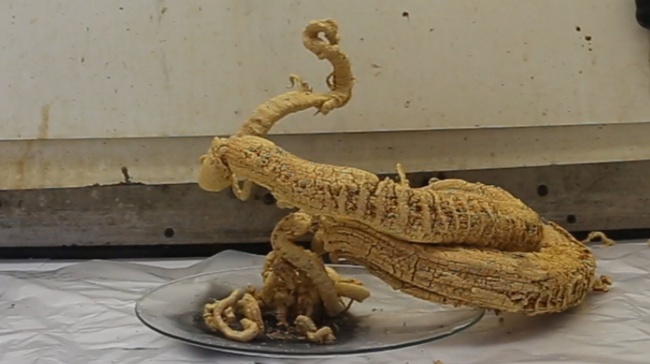 Sometimes at Strange Science, I’ll make jokes about things that look like Lovecraftian horrors. But jokes are all they are – the Mythos could be a metaphor for the horrors of nature, but nature isn’t a horrific abomination. So in reality this tentacle thing must be something perfectly reasonable and not an abomination that…

What you’re seeing here is mercury (II) thiocyanate, more pleasantly known as the Pharoah’s Serpent. Originally discovered in 1821 and used in pyrotechnics, this substance goes through an insanely rapid exothermic reaction when exposed to heat – one that looks like it’s growing a pack of snakes. What’s really crazy is that it looks like powder when the process begins, and when it’s finished you have a substantial solid mass.

So why haven’t we seen this amazing phenomenon very often? It’s not because it’s creepy – it’s because it’s stupidly toxic. That “mercury” part of the equation never gets along with humans, and apparently the fumes are even worse when you light it on fire. In fact, it was briefly available as a firework in Germany until several children tried eating the solid substance and died.

In other words, maybe nature does have abominations after all. 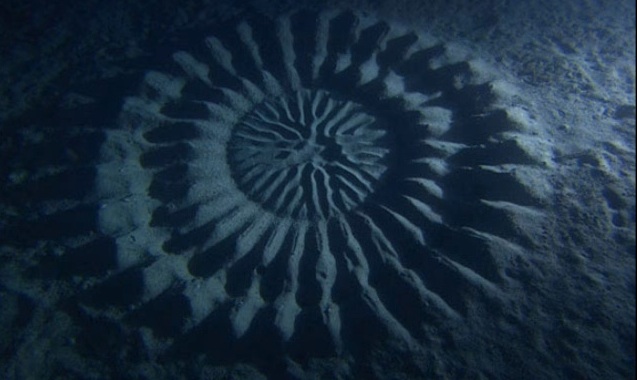 The natural world produces all kinds of fractal designs, so this image shouldn’t look too unusual. Well, except for maybe how large it is. And the fairly significant detail that this was taken underwater – prompting it to receive the name of “Underwater Crop Circles”. And apparently they happen all the time.

But it’s not caused by alien races leaving their mark, and it’s not formed from the motion of waves – it’s crazier. The design was made by a really tiny pufferfish.

Created by males within an unusual species of pufferfish, these formations are incredibly helpful for attracting mates. The fish will flap its fins in a repeated pattern on the sea floor, creating elaborate shapes that are roughly seven feet long. (For context, the pufferfish is five inches long.) Eventually females arrive to inspect the handiwork and, if it’s approved, will lay eggs in the center of the circle for males to fertilize.

Still not impressed? Then consider that it takes seven to nine days to create a suitable circle. These male pufferfish are either very dedicated to their craft or really dedicated to mating. Could go either way. 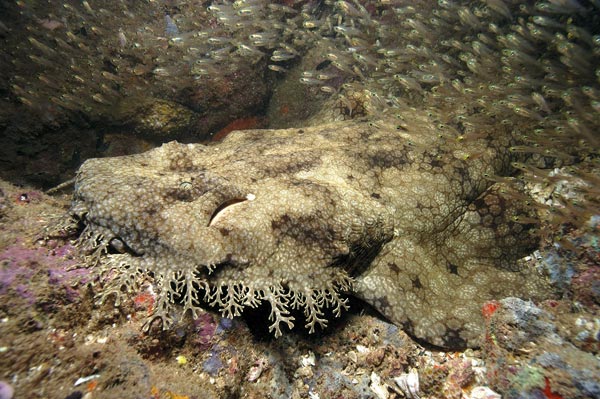 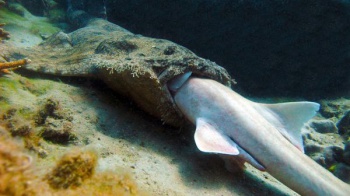 This is the Wobbegong, and my earlier comments to the contrary it can appear legitimately terrifying. Mostly because that’s a picture of one swallowing another shark.

You might not have known it looking at the last image – after all, the Wobbegong looks like vegetation at best and a throw rug at worst. (Prompting some to use the name “Carpet Shark”, even though that technically applies to other species.) The Wobbegon is a bottom-feeding shark that camouflages itself and waits for smaller fish to get close. Or, as one photography crew was horrified to discover, an entire other shark.

So do you need to worry about them? Not really – they spend almost their entire lives resting on the sea floor, and aren’t known to attack humans unless provoked. That said, the largest species (the spotted wobbegong) can grow up to almost ten feet long and when they do bite humans it’s hard to make them let go. 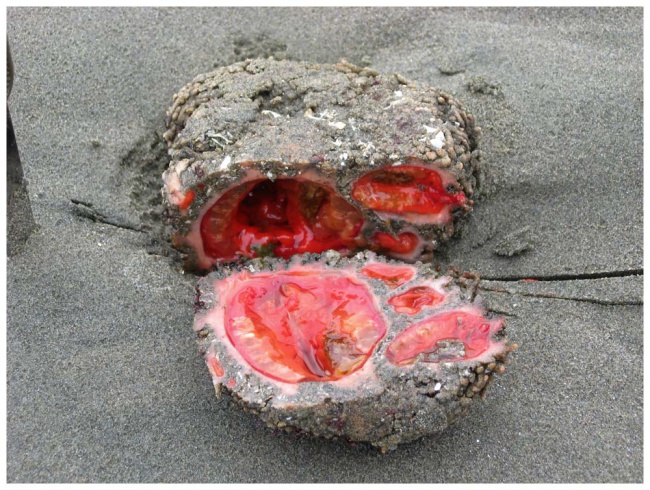 Photoshop? Some kind of art project? It has to be something like that, because the alternative is that someone cracked granite open and found organs inside.

Yeah, that’s pretty much what happened.

This is Pyura chilensi, generally referred to as “Living Rock” and found off the Chilean coast. For all intents and purposes it looks like a rock, but it’s actually a living creature that sucks in water to eat the microbes within. And because humans are crazy, people eat it raw or in stews occasionally – non-locals described it as having a “bitter” and “soapy” flavor. Yum.

But the weirdest thing is that this rock is a hermaphrodite. Living rocks reproduce by releasing their sperm and eggs from both sex organs simultaneously, dumping the results into the water. When the sperm and eggs connect, they form a small tadpole that eventually selects a rock, settles in, and grows into – a rock. It’s a pretty laid back lifestyle, and until a Chilean decides to eat you, it’s probably a safe one.

Although I’ll never look at Fantastic Four‘s The Thing quite the same ever again. 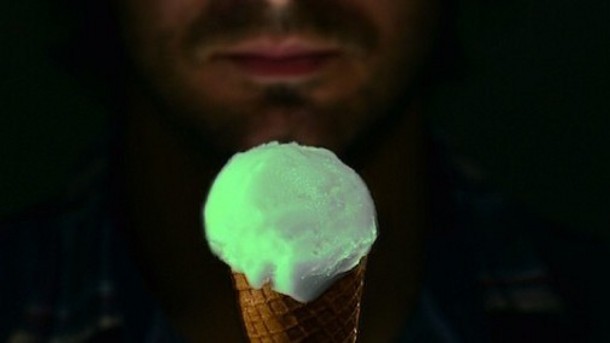 Okay, you’ve all been really good sports this week, so how about we unwind with a refreshing ice cream cone? It’s a common treat that we don’t need to think about closely and… wait, is it glowing? Is it radioactive or something?

Don’t be silly. It’s made of jellyfish.

Designed by British inventor Charlie Francis, this ice cream is made from synthesized jellyfish protein that gives it the florescent hue. But the really cool part happens when you actually lick the ice cream. Agitating the proteins causes the calcium activated proteins from jellyfish to react. Underwater, that’s what gives jellyfish their luminesence. But it makes the ice cream glow in the dark – the more you lick it the brighter it gets.

That’s not to say glow-in-the-dark ice cream is easy to get – buying a single scoop costs approximately $200 dollars. Speaking personally, it doesn’t look that appetizing, but what do I know? Some people eat rocks.

That’s it for this week! How did you do? Feel free to post your answers and reactions in the comments, and until next time: Keep watching the seas.