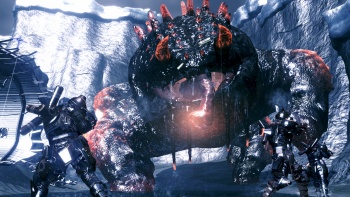 All hope is not lost for a PlayStation 3 version of Capcom’s third-person shooter – Capcom is still “thinking about” bringing the game to the PS3.

Lost Planet 2 made its debut via a trailer on Xbox Live Marketplace. Shortly thereafter, Capcom’s press release came out, announcing that the game is “being developed for the Xbox 360 video game and entertainment system,” but making no mention of the PC or PS3. Since then, Capcom’s been for the most part mum about a multiplatform release, leading conclusion-jumpers to assume that Lost Planet 2 is 360 exclusive.

That’s not completely true, according to recent remarks made by Capcom themselves. They won’t say they’re working on it, they might not be presently working on it, but they sure are still considering it. “We’re still thinking about it and haven’t announced a PS3 version, so we can’t say more about it just yet,” producer Jun Takeuchi told GamesRadar in an interview.

So why all this fanfare solely drummed up for the 360 game? Capcom wouldn’t want to cause any misconceptions, after all. For Takeuchi, releasing the debut trailer was just a “a unique and memorable way to announce the game” as well as a joint effort between Microsoft and Capcom.

On top of that, the 360 player base is a force to be reckoned with, he thinks. “360 users and fans, whether in Japan or elsewhere, are very passionate about their games,” Takeuchi said. “The attach rate in Japan is very high for 360, so I don’t think it’s a matter of numbers in relation to Japan, I think it’s about how passionate the people are.”

Capcom’s talked a big game about multiplatform franchises, and they even designed their in-house engine to support the development of games on more than one platform, so either they’re just waiting on an announcement for whatever reason or Microsoft has secured an exclusive. I’m guessing we’ll hear about PS3 and PC versions sooner or later.