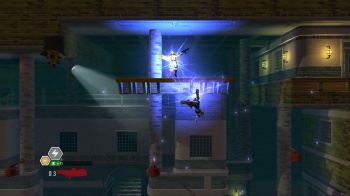 If your PlayStation 3 isn’t connected to the internet and you want to play Bionic Commando Rearmed 2, tough noogies.

When Capcom revived Final Fight on the PlayStation Network in in 2010, it introduced a DRM scheme that required players to be connected to the internet even when playing offline. Despite the ire raised by the scheme, Capcom is still using it in the recent release of Bionic Commando Rearmed 2.

The big difference is that Rearmed 2 doesn’t have any online modes, so players have little reason to connect their PS3s to the internet other than to verify their game is legitimate. Players can log out of the PSN to resume playing offline, but there doesn’t appear to be any way around the check. On a positive note, Capcom at least warns customers of the requirement this time.

One reason Capcom and other companies have implemented this security method is due to PS3 owners sharing their PSN titles. Apparently an online check stops PSN sharing, but I don’t engage in the practice so I can’t verify this for sure.

I totally understand why Capcom feels the need to protect itself from every form of piracy it can, but it should also realize that these types of DRM schemes turn off legitimate customers. Yes, many PS3 owners have their systems connected to the internet 24/7, especially if they’re users of the PSN and download games. However, using the PSN does not guarantee that a player will always have an internet connection available, and that’s the issue.

At the core, there’s just something that feels very wrong about requiring an internet connection to play a game offline. Capcom’s situation isn’t Ubisoft bad, which requires a stable connection throughout the entirety of gameplay, but it’s still going to be a fly in certain players’ ears. There must be a better way.

343 Industries Wants to Inject New Mysteries and Questions into Halo