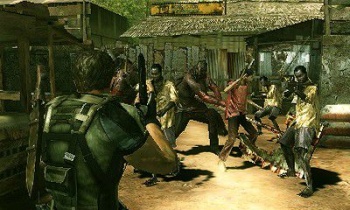 Resident Evil: The Mercenaries 3D will bring a new aspect to the franchise that many fans have been asking for since the original game.

The release of Resident Evil 5 brought with it a controversy over survival horror franchise’s control scheme that still didn’t allow players to run and shoot at the same time. It’s looking like Capcom may be easing its point of view on the matter, with new details from Famitsu magazine on the Nintendo 3DS’s Resident Evil: The Mercenaries 3D revealing that the game will finally feature this ability.

Capcom said that it hasn’t allowed gamers to run and shoot in Resident Evil because it adds a feeling of tension. It makes sense in gameplay terms, but admittedly is weird to be glued to the ground when you should be on the move from any number of dangerous monsters.

Mercenaries 3D is basically the Mercenaries modes of previous Resident Evil titles broadened into an entire game, and is a more action-packed style of gameplay that gives players specific objectives with a time limit. Mercenaries 3D will switch to a first-person mode whenever the player whips out his/her weapon, and in this mode players can move about freely even while firing off rounds.

This could be a new feature unique to Mercenaries 3D, or it could indicate that Capcom has taken the criticism over the matter to heart. According to game director Kazuhisa Inoue, control changes needed to be made to adjust to the 3DS, and the Mercenaries mode is more of a shooter, so it’s entirely possible that the ability to move while shooting in Resident Evil may only last for this handheld iteration of the series.

Other details in Famitsu included that Mercenaries 3D will allow for fully customizable characters in terms of both skills and weaponry, similar to an RPG. Characters like Chris Redfield, Claire Redfield, Jack Krauser, and Hunk will each have specific strengths that can be upgraded and tailored over time. The game will also apparently feature co-op play over Wi-Fi.

Don’t expect any revelations in Mercenaries 3D though, as Capcom admitted that it’s being developed purely as an action game and won’t have any storyline attached. This is just fine with me, as long as the game includes the triumphant return of Tofu.