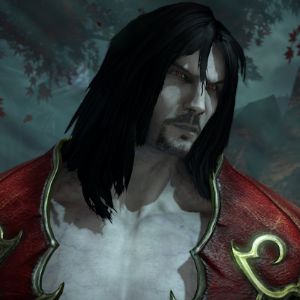 I got five hours into Castlevania: Lords of Shadow 2, and realized the game could have begun at that exact moment without me losing anything of value. The plot up to that point had been treading water. The gameplay, composed of repetitive combat and insipid stealth sequences, was introducing nothing fresh. The first Lords of Shadow displayed Mercury Steam’s problems with pacing, and its sequel was only doubling down. Five hours of nothing … and there frankly wasn’t much more of interest to follow.

While Lords of Shadow 2 desperately tries to address many valid complaints concerning the series, it continues to fail at understanding exactly why showcase action titles like Devil May Cry and God of War are so enjoyable. Its gibberish plot drags itself on and constantly plays for time, while outmoded gameplay tropes are trotted out to pad an already bloated affair. The sad part is, Gabriel Belmont’s latest adventure boasts several fantastic ideas – there’s just no capitalizing on them, no building upon the bountiful potential.

Centuries after the events of Lords of Shadow, Gabriel lives as the feared vampire Dracula, finding himself once again drafted into a war against the forces of Satan because of reasons. Lords of Shadow‘s Dracula is not a darkly smirking prince of evil, however. He is a brooding, conflicted, mumbling anti-hero. Yes, he’s just like the protagonist of Any Other Action Game.

This is the game’s first example of wasted potential. If I am told I’ll be playing Dracula, I don’t expect to be controlling the generic hero of Any Other Action Game. Dracula is just Gabriel with a bit of blood around his chops, and while some may argue that’s the “point” of the character, it doesn’t solve the issue of Gabriel being a very boring hero. It only gets worse as, in another overused plot crutch, “Dracula” loses all his powers after a tutorial taster, and must reclaim them by turning into a rat and sneaking around a pharmaceutical corporation.

One struggles to take seriously a game in which Dracula, the Prince of Darkness himself, transforms into a rat and has to pathetically squeak past common thugs – thugs who can arbitrarily murder him even when he later regains his strength. No other enemy is this tough, by the way. These particular opponents are impossible to kill “just because,” all for the sake of some shoehorned stealth segments that are as pointless as they are half-baked. Even when Slackula faces off against invulnerable demons and building-sized behemoths, the “Stealth Level Enemy” thugs he first encounters will always be too tough for him. Just because. Why aren’t these hired goons fighting Satan? They’re clearly better. 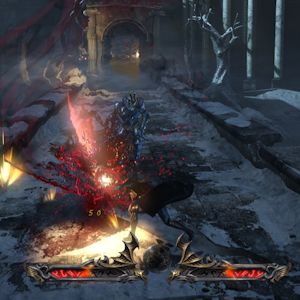 Perhaps it is best not to overthink it. After all, this is a game in which a newly resurrected medieval vampire hears the phrase “pharmaceutical corporation” and never once asks, “What?”

I found myself more than making up for Unspectacula’s lack of questions, though, given that the game rushes through important information in order to provide more pointless sequences of making rats run through small tunnels. Here are some of the fun questions you may find yourself asking:

Why is his coat made out of blood? Who are these guys again? What the Hell kind of plot twist was that? He keeps saying he is immortal, so why can any mindless scrub kill him? Why isn’t Gabriel clutching his head, confused and scared at cars, electric lights, and pipes that hiss like bedeviled serpents?

A modern day Dracula story, with a city built around his fabled castle, is ripe for great ideas, and I would have loved to have seen Mercury Steam explore them. I’d have loved for the studio to explore anything, but the whole tiresome affair is a retread of old concepts from ancient stories, an issue carried through to the gameplay itself.

As with the first Lords of Shadow, while enemies are beautifully designed, it’s hard to tell them apart. They all boast mid-2000s-style area-of-effect attacks, they all have the same telegraphed unblockable moves, and they all follow repetitive patterns. Even the bosses behave the exact same way, no matter how big and impressive they may be. Learning when to block, parry or attack can make for dazzling experiences in more enterprising videogames, but here it’s just a mind-numbing slog. Even with Draculah-de-dah switching between three weapon styles (basically the Light and Dark powers from the first game), combat boils down to learning a handful of effective moves and using them over and over between timed button prompts. For more than ten hours. 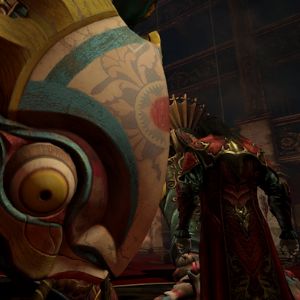 All the filler material you’d expect of a “me too” action game are in attendance. The aforementioned stealth. The convoluted backtracking. The obligatory arena mode. A bit with lasers. Brainless puzzles that make no logical sense. Quick-time-events for literally any reason. Climbing portions that add nothing of value to one’s experience. At the very least, there are no light-and-mirror puzzles this time, something this sequel has over its predecessor.

Nevertheless, it’s all well made content, even if it does have the imagination of a rock. Lords of Shadow 2 looks good and is immaculately polished, and when it really puts the effort in, it can be a mildly satisfying experience. It’s just never exciting, and it fails to break out of the shadow of far superior games. All this is compounded by the consistent failure to do anything interesting with the vampire idea. Outside of looking pale and having a few powers ripped from Symphony of the Night, there’s nothing to make Dracpoola stand out from the pack. Whenever he gets to do anything impressive or cool, it’s in a cutscene – because Heaven forbid we let the player feel as powerful as the character’s alleged to be.

The cutscenes are a fine example of just how vapid everything is. For all its expensive aesthetic, Lords of Shadow 2 is an empty shell. Hollywood actors spout embarrassing dialogue, a brand new game engine delivers old fashioned gameplay, and flashy cutscenes make the player more jealous than impressed. You peel away all of the triple-A finery from this glitzy Castlevania forgery, and you’re left with nothing.

You barely even get to fight any skeletons.

Bottom Line: Castlevania: Lords of Shadow 2 looks gorgeous and could have been wildly original, but it squanders its polish and potential on archaic contrivances, banal writing, and an overall shallow experience. It’s fine if you want a factory standard combat game, but in the year 2014, it’s just plain dreary.

Recommendation: If you managed to play every God of War without getting bored once, you’re just the kind of person Lords of Shadow 2 is looking for.