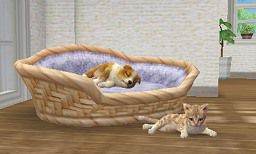 The whims of Shigeru Miyamoto, including his status as a pet owner, have a big effect on the games Nintendo produces.

Nintendo’s DS title Nintendogs has been the de-facto portable pet simulator for years now, but cat owners were totally left out. Fans have been clamoring for a Nintencats, and Nintendogs creator Shigeru Miyamoto seemingly acquiesced with upcoming 3DS title Nintendogs + Cats, but the addition of felines was apparently not a response to these cries.

At Nintendo World 2011, a public event that gave the Japanese public hands-on time with the 3DS, Nintendogs + Cats producer Hideki Konno took to the stage to talk about the game. He revealed a bunch of new features, including one Kinect-ish ability of Nintendogs + Cats to recognize faces with the 3DS camera and have player-specific pets come to the screen without any input at all.

Nintendogs + Cats will also add the ability to take 3D pictures of your pet(s) and save them to an SD card or share them through the 3DS’s Street Pass sleep mode. Additionally, it’ll feature an augmented reality mode that will make the virtual pets appear in real world locations.

So why the addition of cats? Konno said: “During development of 3DS Nintendogs, Shigeru Miyamoto got a cat.” Well, that explains it.

Nintendo pored over the idea of creating another virtual pet simulator focused just on cats, horses, or even dolphins (why does that sound familiar?), but Miyamoto, apparently inspired by his new pet, thought players would make “interesting discoveries” if both cats and dogs were allowed to live together. Funnily enough, Nintendo tried to reuse some of its dog animations for Nintendogs + Cats‘ in-game cat models, but ended up making cats that acted like dogs.

If only Miyamoto had gotten a monkey instead, we could have had Nintendogs + Monkeys. Maybe next year.