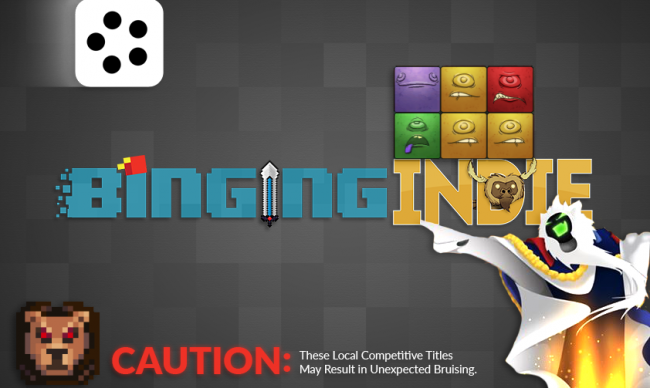 This is only a small sample of the wealth of entertaining and infuriating indie titles we’ve encountered recently.

I’ve talked about my penchant for local multiplayer, and discussed some great cooperative titles a couple weeks ago, but I’m a competitive gamer (despite my tendency to be bad at a lot of games) and enjoy taking friends on, rather than working towards the same goal. I’ve been exchanging friendly jabs with my gaming group since the early days of Street Fighter II, on through Tekken, Perfect Dark, and anything else we could find to compete in. Yeah, it hurts on occasion, but your victory that incited the roughhousing is all the sweeter because of that kind of reaction. We’ve got a handful of great competitive titles today, which bring back these old, occasionally violent tendencies in fully grown adults.

Okay, yes, Tumblestone is a match-3 game. I thought the same thing every time the devs asked me to check it out. Having finally played it at PAX, I regret every time I didn’t make the time to see it. I’ve played more than my share of Puzzle and Dragons over the past couple years, so matching tiles didn’t have much appeal to me. Tumblestone is a whole different breed, though, with a mission-based campaign mode, as well as competitive local multiplayer, both offering meaningful challenges and even fail states.

Tumblestone can accommodate up to four players locally, but can optionally fill empty slots with AI if you want. You’ll each have a board laid out with blocks of different colors, with the goal of clearing all blocks by matching sets of three of the same color before your opponents. It is often easier said than done, though, since the puzzle elements mean that you’ll frequently clear blocks in the wrong order, leading to an impossible board state, and requiring a restart. Naturally, if your opponent doesn’t mess up, restarting almost invariably costs you the round.

Multiplayer has four modes, with modification options available to spice up the experience. Puzzle Race pits you against your opponents with no form of interaction. it is strictly a race to clear the board. Most of the time I’ve spent with the game has been in fierce Puzzle Race competition. Battle Mode has you racing again, but this time it’s to clear a specified number of sets before your opponent, with the twist that each time you clear a set, your opponent’s board gets a new row tacked on. It works in reverse, too. There’s also Elimination, which seems to blend the two previous modes. You’re racing to clear the board, rather than clear a specific number of blocks, but clearing blocks on your screen adds a row to your opponents, which can make for grueling matches. There’s another mode, Tug of War, but I was unable to ascertain exactly what the mode means, given the early Alpha build’s lack of tutorial information.

Tumblestone could very easily be a mobile game (and likely will) but the thoughtful puzzle solving gives it significantly more depth than you’d expect from a cursory glance.

Dungeon League is a game meant for in-person competition, pitting teams against each other in an bid to win a best of five match. It’s a top-down, pixel-art, competitive dungeon crawl. There are several heroes to choose from, covering the gamut of fantasy character archetypes – wizard, warrior, and ranger, for example – as well as some particularly silly characters, like the unicorn with abilities such as Rainbow Dash. Each character has a default skill progression that you can optionally customize before each match, in case you favor a particular skill upgrade path. Equipment is handled similarly, with a preset gear order. Leveling during a match automatically upgrades your skills and gear as per your chosen path. If you’ve played recently, these might come as a surprise since a recent update changed the manual skill and equipment upgrades between rounds into an automatic system to keep the game focused on action, rather than inventory management.

The teams will be dropped into different rooms across the dungeon from one another, and must fight off an endless stream of enemies while simultaneously trying to complete the round’s objective. The dungeon maps are randomly generated, so you’re exploring along the way, though the maps do tend to be fairly small, consisting of only a dozen or so rooms to navigate. You’ll see standard deathmatch mode, where you’re just trying to get more player kills than your opponents’ team. There’s a flag race mode, which requires you to locate numbered flags, then tag each flag in order, scoring one point each time you complete the cycle. Capture the flag is particularly entertaining, since it demands more interaction between teams, since you’ll need to kill any opponent that picks up your flag in order to score a point by collecting theirs.

Dungeon League is one of those games that you’ll find infuriating if your opponents are strictly better than you, and find endlessly entertaining if you’ve got the leg-up on the player skill front. The learning curve isn’t too steep, though, so it might take a couple of rounds for the competitors’ to get onto an even playing field, but seems to level out in almost all groups. The variety of characters and skills keeps things interesting, even over a longer session. 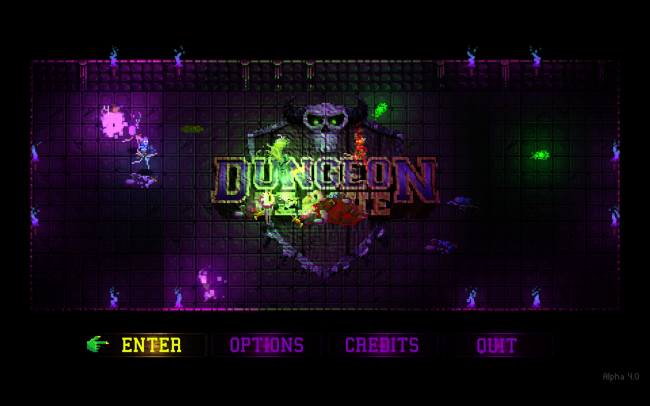 One-man indie dev, Ryan Juckett’s studio Hypersect, recently got the Greenlight on Steam for minimalist action game Inversus. Its simple appearance is deceptive, however, and behaves like a fast-paced strategy game. Inversus uses a primarily black and white color scheme, which mirrors the game’s reminiscence of an ancient chinese strategy board game, Go. If you’re unfamiliar, the goal of Go is to claim portions of the board by completely surrounding the space with tokens of your color, either black or white. Inversus takes a number of the integral elements of Go and tosses them into an action environment, where the board is constantly changing.

You’ll control a small black or white block – you can only move on map squares of the opposing color – shooting your color-changing weapon in a straight line in a cardinal direction. Any tile your projectile passes through turns into the opposing color, allowing you to create new paths for you to traverse the map, as well as block your opponent’s move options. You’ll both be doing this constantly, so the map is an ever-changing environment, ensuring a dynamic experience each time you play.

There are buffs that spawn periodically, with powerful effects like quick shot, which makes your next projectile travel incredibly quickly, making it much harder to dodge. Another pickup allows you to move through any tile, regardless of color, making for a brief but intense chase scene. The variety of maps is impressive for such an early build of the game, and each map variation will require a drastically different strategy. Some maps are comprised primarily of single-tile corridors, while another might have large, impassable sections allowing for more of a cover-based match, dodging in and out of cover while you and your opponent trade shots.

Inversus takes an incredibly simple concept from a 2,500 year-old board game and turns it into a frantic action video game. It might look simple, but with a two-and-a-half millenia old foundation, it is quite a bit deeper than it appears.

I always enjoy seeing smaller devs getting their games onto consoles, though I’ve seen a peculiar trend of middling indie games dominating console publishing, so when I see something that stands out, I take notice. Clash is definitely one of those games. It’s designed for local multiplayer, with up to four players battling it out in a single-screen arena. It plays like a platformer with two moves; a dash attack and a short-lasting shield.

I wasn’t sold on Clash after one match, since I hadn’t yet discovered the more advanced tactics, like using the screen wrap to jump through a hole in the floor, dropping down from the top to get the drop on an oblivious opponent. You’ll quickly learn the cooldowns for both dash and shield instinctively, which is imperative to success.

Your dash attack doesn’t travel far, but connecting with an enemy will one-shot them, and puts them on a short respawn timer. When you see an enemy setting up a dash attack, you’ll want to time your shield to deflect the attack. It’s not just a block, however, as dashing into a shield will knock you back, pretty much across the entire screen. Similarly, if your shield is on cooldown, you can time your own dash to counter the opponent, sending both players flying.

Unlike most of the other games included here, Clash doesn’t lend itself to extended play sessions. You’ll likely find yourself playing several matches until a clear winner is determined among your group, since it does inspire competition quite well. While you might not sit down for hours at a time, I still find myself eager to come back and play a few more rounds whenever there are people around. When you get tired of dying in whatever roguelike you’re playing, a few rounds of Clash is the perfect 20-minute distraction.

If you’re big on indies, please submit your own projects or personal favorites to [email protected] so we can check it out!