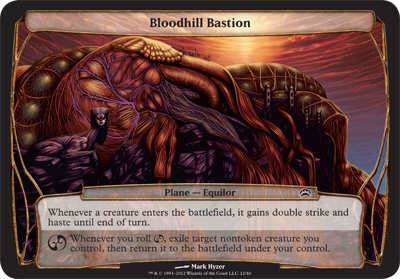 Back in 2009, Wizards released Planechase, a new-at-the-time multiplayer format for Magic: the Gathering. On June 1, 2012, we’ll be seeing the latest installment of Planechase featuring new Planes, Phenomena, and even new spells. I got my hands on the ‘Night of the Ninja’ deck and played a few games with it to see what all the fuss was about. Suffice to say, I was not disappointed. You can check out the decklists for all of the Planechase 2012 Edition decks here.

In Planechase you’re still playing a normal game of Magic with a 60-card deck and at least one opponent. While the format was devised for multiplayer, this is not required to enjoy the experience. The twist comes with the Plane cards, which represent different lands in the multiverse. At the beginning of the game, the first player reveals a Plane card from the top of their Planar deck which represents the first location of the game. As the game progresses, players have the opportunity to planeswalk between planes, revealing another random location, by rolling the Planar die. The die is a d6 with a Planeswalker symbol on one side and a Chaos symbol on another which triggers the Chaos event on the active Plane, giving a two-in-six chance that something exciting will happen on each roll. You can roll the die as a Sorcery for free once each turn, then you can pay one colorless mana for each time it has been rolled that turn to roll it again. With the 2012 edition, we’ve also been introduced to another type of Plane card, ‘Phenomena.’ These are one-shot effects, which don’t persist like the Planes themselves do, but can completely overturn the status quo of the game in progress.

In theory, each player should have their own Planar deck which is supposed to complement their 60-card deck. In my games, however, we shared the Planar deck, providing some slight advantage to the wielder of the ‘Night of the Ninjas’ deck, due to the synergies between the two. The planeswalking aspect is reminiscent to me of the new Miracle mechanic, in that they instill a lot of randomness to the game, but make things more fun in the process. It’s not necessarily about having the most powerful deck in Planechase and being able to utilize the various Planes and Phenomena is going to be crucial to a winning strategy, as the effects are generally far more powerful than a normal spell in the game.

Take Bloodhill Bastion, for instance, which acts like a global enchantment, causing all creatures entering the battlefield to have Haste and Doublestrike. With Ninjas like [mtg_card=Okiba-Gang Shinobi], this can warp the entire flow of the game, causing unwary opponents to have to discard multiple cards whether you cast Okiba, or used Ninjutsu to bring it into play. Evasive creatures like [mtg_card=Tormented Soul] and [mtg_card=Dimir Infiltrator] give you plenty of opportunities to utilize the Ninjutsu ability, which reads “Return an unblocked attacker you control to hand: Put this card onto the battlefield from your hand tapped and attacking.” Given that I wasn’t actively playing during the heyday of Ninjutsu, I’ve been pretty pleased to have a chance to toy with the mechanic.

Far and away the most fascinating play I saw in my games was when I was battling against the Nicol Bolas duel deck. I was playing Ninjas, and had been on the ropes since running into the Morphic Tide phenomenon. I ended up with only two lands and a pair of creatures on the battlefield alongside a [mtg_card=Quietus Spike] which I couldn’t quite afford to equip, and was staring down an imminent defeat. Eventually [mtg_card=Nicol Bolas, Planeswalker] resolved on the opposing side, and threatened to steal what few creatures I had managed to get into play. I made great use of Ninjutsu to sneak the brand new ninja, Silent-Blade Oni, into the fray and I was able to cast my opponent’s [mtg_card=Cruel Ultimatum] on them. This completely swung the game, finally getting me on the offensive and, without much further resistance, I was able to clear out the opposing Elder Dragon-turned-Planeswalker and claw my way to victory.

All told, Planechase is a fun, if wildly random, addition to Magic. The Planar decks look to work particularly well with their complementary 60-card decks, which seem to have been designed with huge game swings in mind. Between the innate randomness of rolling the Planar die, and the Cascade ability featured in the ‘Chaos Reigns’ deck, there is a huge element of chance integrated into the pre-constructed designs, and the games should play out to be unique experiences practically every time. Of course, my matches with Planechase were only two-player games, where Planechase is designed for Multiplayer, so the action I’ve seen likely pales in comparison to what happens when you have four or more players rolling the die and shifting planes. Did you play Planechase back when it was first released? What kind of response did it get from your playgroup? Are you looking forward to trying out the latest additions to the format? 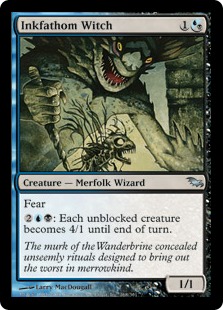 A: Attacking creatures don’t count as ‘unblocked’ until after blockers have been declared in the Declare Blockers step. You must activate this ability during the Declare Blockers step, after the declaration of blockers, which in this case would be none. Activating the ability before this point or after combat ends will do nothing and, given that there are no First Strike or Doublestrike creatures in combat, there will not be an opportunity between combat damage steps to activate the ability.