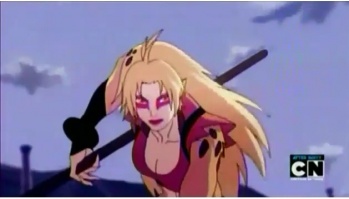 Apparently the Thundertank isn’t the only thing that’s getting an update.

So it’s been fairly common knowledge that ThunderCats is getting an animated reboot, courtesy of Cartoon Network, and now that its July premiere is fast-approaching, more and more details are coming into the light. From the sound of things, the new series is going to not only be pretty fun, but it’ll definitely be geared towards an older audience.

io9 recently got to sit down with the series’ creators, ask some questions, and check out a new trailer. The show is, basically, set to be an origin story, featuring a smaller, younger Lion-O who will grow in size during the series. On top of that, Panthro is going to be the big strong guy and will be more intense than he was in the original series. Oh, and Cheetara “has gotten a boob job.”

Here’s what io9 got to see:

In the trailer, we see the idyllic land of Thundera – which is no longer its own world, but just a walled city-state on Third Earth. It’s the days of peace and prosperity, but the voice-over warns us that the tribulations have been prophesized. And indeed, a whole army of lizard people come to attack Thundera, with huge mecha walkers and missiles and lasers, against the Thundercats’ flaming arrows. The Thundercats promise to “fight like cats,” but to no avail, as we see Thundera being destroyed. Cheetara joins the fight, with lots of awesome cat-fu, and Lion-O holds his sword aloft, with lots of lightning. “Go Thundercats Go!” we are exhorted.

Meanwhile, there’s some other info that fans of the series will probably get a kick out of. The Thundertank will be present in the cartoon, but it will have some major updates, including new missiles and motorcycles that come out of the arms. Finally, Snarf won’t be nearly as hatable as he was in the original cartoon. Apparently the folks behind the show are taking Snarf in a decidedly Pokémon direction: He’ll still say “snarf” a lot, but he’ll also make other animal noises that Lion-O will be able to understand. Finally, there’s some stellar voice-actors involved with the project: Clancy Brown (known to many for his excellent work as Lex Luthor in Superman and Justice League) will voice Grune the Destroyer and Robin Atkins-Downs is taking over the role of Mumm-Ra.

Overall, this generally sounds pretty good so far. I also enjoyed Cartoon Network’s revamp of He-Man. Now, if the channel will just update Silverhawks, I can die a happy man.