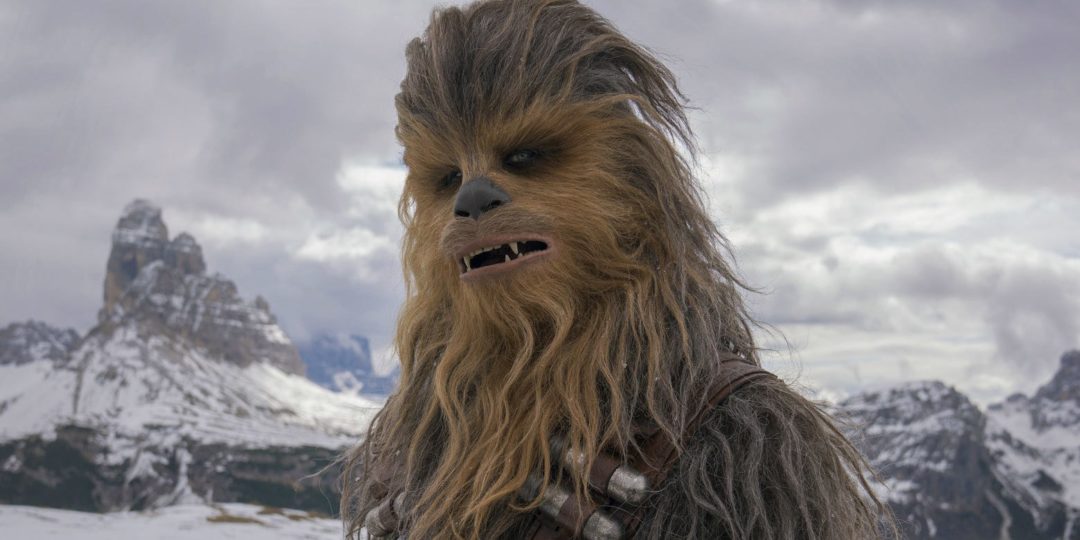 When I was seven years old, I wanted to be Chewbacca. Friends and I would pretend to be different Star Wars characters, and if I didn’t get to be Chewie, I would quit. I think I cried on one occasion in a display that was not very Wookie-like behavior.

Why was I so obsessed with the Chewbacca? I don’t think it’s particularly mysterious. Children are small and powerless,and I in particular was skinny, shy, asthmatic, and occasionally bullied. Chewie on the other hand was gigantic — actor Peter Mayhew, who died earlier this year was 7 feet 3 inches tall. He had fur. He roared. Luke was whiny, and I found him insufferable even back then. Obi-Wan was old. Darth Vader was appealing, but evil. C-3P0 was too annoying; R2-D2 too cute. Leia was a girl. Han was interested in girls. Chewie though — he had no distracting character traits, or dialogue, to get in the way. He was just a big, fuzzy juggernaut of empowerment and appealingly inarticulate growls.

The stories I made up about Chewbacca were not especially complicated. We occasionally restaged scenes from the film, but my friends and I would mostly just fight stormtroopers. They (as Han and Luke) would shoot the stormtroopers with lasers, and I, as Chewbacca, would pull the stormtroopers’ limbs off. Chewbacca never actually pulled any stormtrooper limbs off in the movies, but we all agreed that he should have. When we’d run out of stormtroopers, we’d pretend to super glue them back together so we could rip their limbs off again. I don’t know why. I guess we thought superglue was cool. We were seven.

Those simple, bucolic tales of Wookies beating bad guys to death with their own arms sound silly now, because they are in fact silly. But it’s also because the Star Wars franchise is so much more sophisticated now. 40 years on, Star Wars has generated an infinite number of sequels and prequels and side stories and backstories, a sprawling mythology, and an even more sprawling fandom and critical community. Recent films like Rogue One and The Last Jedi are complicated riffs on — and sometimes even direct responses to — earlier films and fan expectations. They generate entire narratives based on a single line of dialogue from an earlier movie. They switch things up so the stormtrooper gets to be the good guy. They set the Han Solo rebel analogue up for failure when he swaggers off on his own unauthorized missions. Star Wars isn’t just about being tall and roaring any more.

Not all of this elaboration and world building has been bad. The obsessive focus on political machinations in the prequels was a misstep, to put it mildly, but the Star Wars universe as a whole had to be fleshed out over time in order for it to survive. You can’t go through 10 movies and counting (not to mention cartoons, novelizations, comics, video games, etc.) without providing some explanation about how the Jedi Order works or what the Clone Wars are. You’ve got to fill in some gaps, or the whole edifice will collapse.

As those gaps have been filled, though, Chewie has become less and less important. There’s just not a whole lot you can add to a character who communicates in grunts and growls, and who is essentially just a really big, loyal dog. That’s part of why the 1978 Star Wars Holiday Special, which introduced Chewie’s family, was such a trainwreck. A bunch of actors in hairy quasi-monkey suits wandering around a living room growling at each other doesn’t make for riveting television. Nor does filming a Wookie sexual fantasy about Diahann Carroll … but the less said about that the better.

It still seems unlikely that there will be a Chewbacca film anytime soon. We’ve already had one, though: the first Star Wars film I saw back when I was a kid. Chewie was a minor character even then. But my seven-year-old self was onto something when I picked him as the protagonist of the movie.

It’s a little hard to remember now, after decades of embellishment, but the initial Star Wars film did not have a lot of depth. The movie that would come to be known as A New Hope  raced along from magnificent set to set and adventure to adventure like the old serials that George Lucas loved. Chewie is the perfect icon for a movie about special effects and awesome spectacle. He’s a giant cool-looking monster with nothing to say for himself and virtually no character development. If you’re creating an epic space opera filled with weighty destiny and intricate meaning, he’s a flop. But he’s perfect if you’re making a kids movie.

And the original Star Wars film was mostly for kids. Chewie was like one of those animal mascots in a Disney film, if the mascots were bigger and stronger and could tear the arms off stormtroopers. Peter Mayhew lived long enough to see his character become largely superfluous — a shaggy nostalgia backdrop for Harrison Ford’s performance in The Force Awakens.

For me, though, Chewbacca was once what Star Wars was all about. Luke becoming a man, that rascal Han finding redemption, Leia winning the war, even Darth Vader and Grand Moff Tarkin doing evil stuff — that was all secondary to Chewy being huge and punching people. My seven-year-old self wouldn’t have built a great franchise, even with superglue. But he wasn’t wrong.

Mother 3: New Footage of An Even Less Playable Version Discovered

Halo Infinite Needs to Forge a New Legacy Beyond Bungie