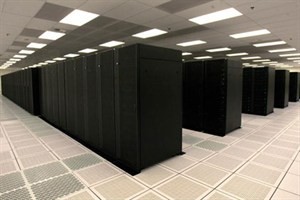 The United States has long held the world’s fastest computer within its borders but China just made a mega-computer that makes ours look like a pocket calculator.

Tianhe-1A took Chinese scientists at the National University of Defense Technology in Changsha 2 years to complete. The project total cost $88 million and the 200 scientists and technicians working on the supercomputer clocked the Tianhe-1A (which means Milky Way in Chinese) at performing 2.507 petaflops at its peak. That’s a quatrillion calculations per second, which beats out the Cray XT5 Jaguar housed at the Oak Ridge National Laboratory in Tennessee (1.75 petaflops).

“The scientific research that is now possible with a system of this scale is almost without limits; we could not be more pleased with the results,” said Guangming Liu, head of National Supercomputer Center in Tianjin where the Tianhe-1A is housed.

The sheer scale of this super-computer is staggering. The Tianhe-1A is housed in 103 cabinets that resemble large refrigerators. The entire computer weighs 155 tons and occupies an area of about 1,000 square meters. All of the computing power is supplied by 7,168 Nvidia Tesla M2050 graphics processor units (GPUs) and 14,336 Intel Xeon central processing units (CPUs). Using Nvidia chips instead of standard CPUs is more efficient, but its estimated annual electricity bill is still $2.7 million.

The Tianhe-1A is definitely impressive but I wonder how it will compare to the computers of the future as predicted by Douglas Adams. Is it a more fiendish disputant than the Great Hyperlobic Omni-Cognate Neutron Wrangler of Ciceronicus 12? Can it talk all four legs off an Acturan mega-donkey and persuade it to go for walk afterwards? Will the Tianhe-1A be able to calculate the answer to Life, the Universe and Everything?

Until then, molest me not with this pocket calculator stuff.

The Hammer Falls on Realtime Worlds