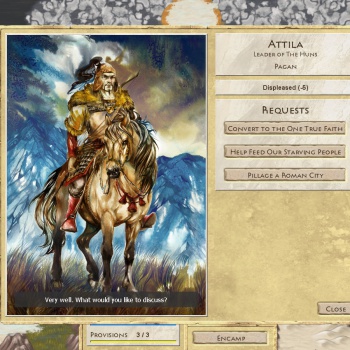 In Conifer Games’ first project you get to be the barbarians sacking Rome.

It’s a simple story, really, one you’ve heard a million times before. Boy plays game. Boy makes mod for game. Boy gets hired to work for game company. Boy makes a great game. Boy quits, joins another company. Boy quits … again … and starts his own company to make the games exactly how he wants to. Ok, it’s not really that of a common story, but Jon Shafer’s joining the ranks of game designers who see more promise in developing niche titles independently rather than as part of a large, corporate-backed team. The game he announced he’s making on Kickstarter today is a turn-based strategy game called At the Gates and it offers a unique take on the era after the downfall of the Roman Empire, focusing on barbarian tribes like the Vandals and the Huns rather than the Romans themselves. The small team of Shafer plus two other part-timers means there won’t be fancy 3D graphics, but that frees up time to work on new design ideas.

After serving as the lead designer and programmer of Civilization V at Firaxis, Shafer left to join Stardock to work on Elemental: Fallen Enchantress, amongst other projects. He quickly learned the company wasn’t a perfect fit because he missed being hands-on as a programmer, something he got used to at Firaxis.

“There’s a unique role at Firaxis that is almost nonexistent elsewhere – the lead designer/programmer. Instead of a team of designers and a team of gameplay programmers, all of these duties are wrapped up into this one single job,” he explained to me. “I was stretched pretty thin on Civ 5 between my duties on the game, managing a team of 50, setting the project’s direction, etc. As a result, I do think that Civ 5 suffered to some extent.”

At Stardock, he pulled out of the programming role to concentrate on a more managerial design role, but that didn’t work out either. “I eventually came to the realization that I really missed getting my hands dirty in the development. While I love working directly with great people, my true passion is creation,” Shafer said. “There was [only] one way to get where I wanted to be: starting my own company. Fortunately, the emergence of Kickstarter and the innumerable opportunities to sell your games digitally means there’s never been a better time to start up an indie studio.”

As you’ve seen from the huge number of campaigns in the last year, crowdfunding has definitely shifted the paradigm to allow designers to create games without publisher investment. “Crowdfunding is absolutely revolutionizing the games business,” Shafer said. “There’s no way I could sell [publishers] on At the Gates, a historical 4X game with 2D graphics where you play as a group of barbarians! I have complete confidence that the game will do well and make quite a bit of money, but the ‘quite a bit of money’ I’m talking about is the kind of thing AAA developers lose in their couch cushions.”

So it’s up to Shafer to sell us on At the Gates instead. Luckily for him, there’s a lot there to be excited about, especially if you’re a historical strategy fan. First off, it’s refreshing to think about tribes of barbarians as your factions instead of adversaries. “There have certainly been games about Rome and even its fall, but the barbarians who helped bring it about have always been relegated to serving as antagonists, rather than being the stars of the show,” Shafer said. “It’s a very evocative theme, regardless of which side you view it from.”

At the Gates starts in 375 AD, “a few years before the momentous battle of Adrianople, when the Goths completely destroyed the Eastern Roman Empire’s army,” Shafer said. You’ll take turns moving units across a hex-based map of Europe, but the terrain will change and shift with the seasons and I’m intrigued by how the weather has a random element to it.

“Most tiles will have a 100% chance of ‘snow’ in January, but it could be 85% or 15% in other months,” he said. “This gives players the opportunity to adapt and switch up their strategies. An invasion might be delayed when you expect a river to still be frozen, but it thaws a bit early in the year. Or maybe a tile stays fertile an extra month or two, allowing your armies some free foraging you didn’t plan on. So it can both help and hinder you.”

You can play as one of 8 barbarian factions in Europe, vying for resources against each other and the remnants of the Empire. Inevitably, you’ll have to pick your friends and Shafer promises diplomacy between the barbarians will feel more like you are negotiating with a proper rival. “A flaw in many diplomacy systems is that they’re confusing, boring or half-baked,” Shafer said. “What many people (both designers and players) forget is that AI leaders are just another system that needs to adhere to the same game design rules as any other system. You need to know what’s going on and have interesting strategic trade-offs to make.”

In order to make diplomacy in At the Gates “feel right” Shafer says he’ll make sure you know what you need to do to make a friend and keep the personalities consistent. No Gandhi dropping nukes all of sudden, for example. “Some leaders should be complete backstabbers. Others should be very generous when trading. One guy might always go naval, while another fields nothing but horse archers,” he said. I like that he’s aware distinct characters don’t always make the best gameplay decisions. “These might not be optimal playstyles, but optimal basically means ‘completely homogeneous and unrecognizable,’ which is obviously very much antithetical to the goal of satisfying diplomacy.”

War will be kept on a strategic level. Shafer doesn’t want the game to become too incremental or involve complicated rock-paper-scissor relationships between unit types. “I’m planning on there being roughly 20 unit types in the game. The focus of the game is more on the strategy than the particular tactics, so the classes are fairly basic, e.g. Infantry, Scout, Light Cavalry, Heavy Cavalry. I want all of the units to be very distinct in their strengths and weaknesses.” Even though the game will focus on the lands to the north of Rome, navies certainly won’t be ignored. “The naval game is an important strategy available to players,” he said. “Becoming a sea raider ala the Vandals is very much possible, and very likely profitable. You first have to obtain the ability to construct boats though, and you really have to invest a lot to make it work. Or… you can just try to capture someone’s city that has some boats in it, and commandeer them for your own hodge-podge navy.”

Keeping your units in supply will be a huge endeavor, but At the Gates tries to model how barbarian armies lived off the land. “It’s possible for a small army to completely satisfy its supply needs by sticking to fertile tiles and pillaging farms and cities, but once winter comes around you’re probably in trouble,” Shafer said. Supply camps will provide support a certain number of hexes away, as will cities and settlements.

Looking at the assets for At the Gates isn’t very impressive; the art style focuses more on symbols instead of providing photo-realistic graphics. Shafer assures me the decision to use graphics which could be produced under his tight budget is all you really need for a strategy game. “The more detailed and realistic the art, the harder it is to actually tell what’s going on,” he said. “In games where immersion is absolutely vital this is an acceptable tradeoff, but I don’t feel that’s the case in a strategy game. Our art style isn’t completely locked down, but our goal is absolutely a representational, almost board game aesthetic.”

The art is created by one of Conifer Games three employees, Kay Fedewa. Shafer and Fedewa, and At the Gates‘s “architect” Jonathan Christ all live in the same house near Detroit, Michigan. When I heard that, I imagined the house as some kind of MTV’s Real World: Game Design, but the group seems to have a very zen approach to making games. “We’re all big fans of nature, Kay especially,” Shafer said. “We have about 50 plants around the house, which is on a wooded lot that’s about an acre stuck in the middle of the metro Detroit area.” Other than Tweeters, the little blue parrotlet you can see on Fedewa’s shoulder in the final shots of the Kickstarter video, it doesn’t get too loud in the house. “We all get along really well, so there’s rarely any drama. Usually just me bugging people about needing to get more work done towards a deadline that only I understand.”

A lean team means Conifer Games can work together quickly to iterate on the design of At the Gates. Based on the 15 min. playthrough video released with the campaign (see embedded video below), the game looks like it’s in a playable state and Shafer will just be pushing along the project until it’s up to his standards. It helps that Shafer is an incredibly well-spoken and amazingly driven individual. Shafer is just 29 years old – he said he’s been in the industry for 8 years now – and he’s probably accomplished more in that short span than I likely will when I’m fifty. At the Gates is his chance to make his personal mark on the strategy game genre he loves and the industry as a whole. Many of you will only recognize him as the lead designer of Civilization V, but he’s doesn’t really care about all that.

“Maybe I’ll always be the Civ 5 guy, maybe not – there’s no way to say right now,” Shafer said. “But honestly, I’m not too concerned about what I’m known for, as long as I’m able to continue doing what I enjoy and can keep dinner on the table!”

If the campaign to raise a mere $40,000 is successful, he should have no problem putting a few steaks on the grill.