Civilization: Beyond Earth had some troubles. Let’s see if Rising Tide managed to fix them. 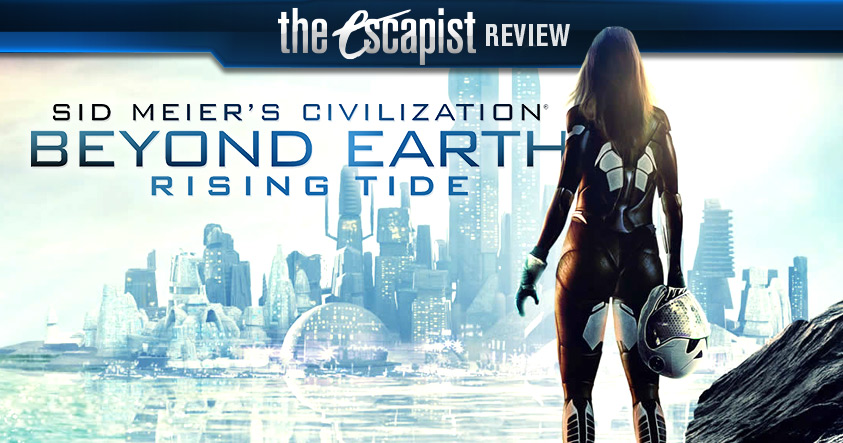 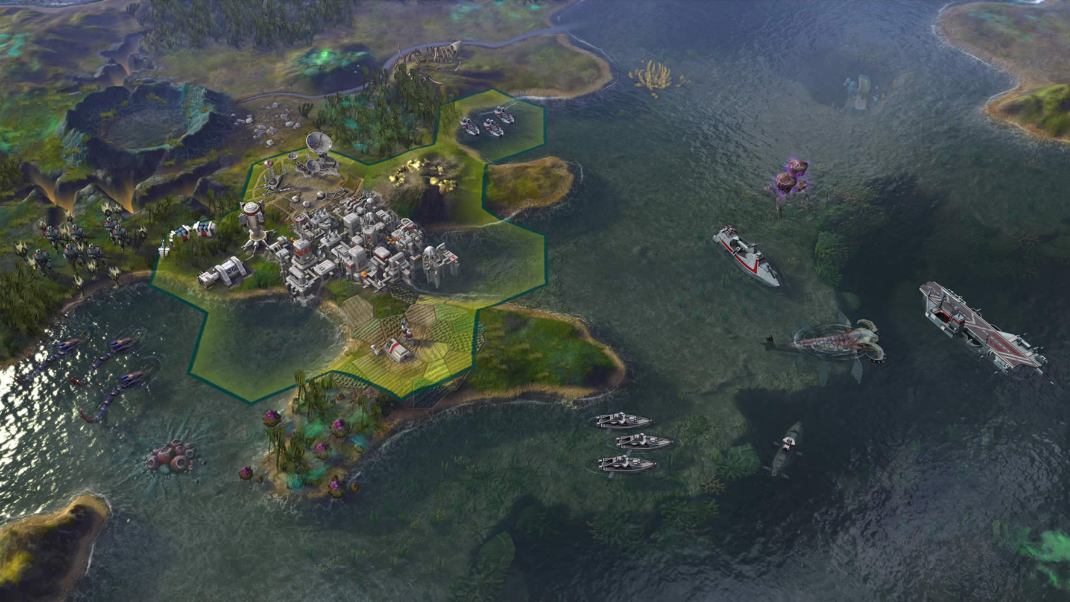 You can explore the ocean. It’s a lot like building things on land but uses lots of naval combat, which is inevitably less varied and exciting.

The much-maligned Tech Web doesn’t seem to have changed too much, with the affinities relevant to a given tech being the only change. If you’re looking to improve Harmony, though, you’ll still need to hover over each tech because to my somewhat-color-blind eyes, with Harmony being almost indistinguishable from the normal color used in the circle until said tech has already been researched. Adding the right combination of H, S, or P would have improved this change immensely. Even if that’s changed, I still prefer the tech tree from nearly every other strategy game I’ve played to this. It’s still just hard to read.

An example would be the Ranger, the basic ranged infantry unit: Both of the upgrades for the “Fury,” one of the new synergy upgrades, takes the attack modifications from the “Executor” third-tier upgrade along with the unimproved ranged attack. One of the upgrades is directly pulled from the “Executor” and the other upgrade has the “All Movement takes one point” feature but otherwise stays the same. The Harmony/Purity upgrades for the “Fury” are instead available at 7 Harmony/7 Supremacy, instead of at either 12 Harmony or 12 Supremacy. This upgrade system has issues compared to the mostly-linear upgrade path from Civ 5 in identifying existing units, but I don’t really think it’d be possible to implement it better without outright changing most of the game. It does add choice, but choice due to greater complexity rather than greater depth. 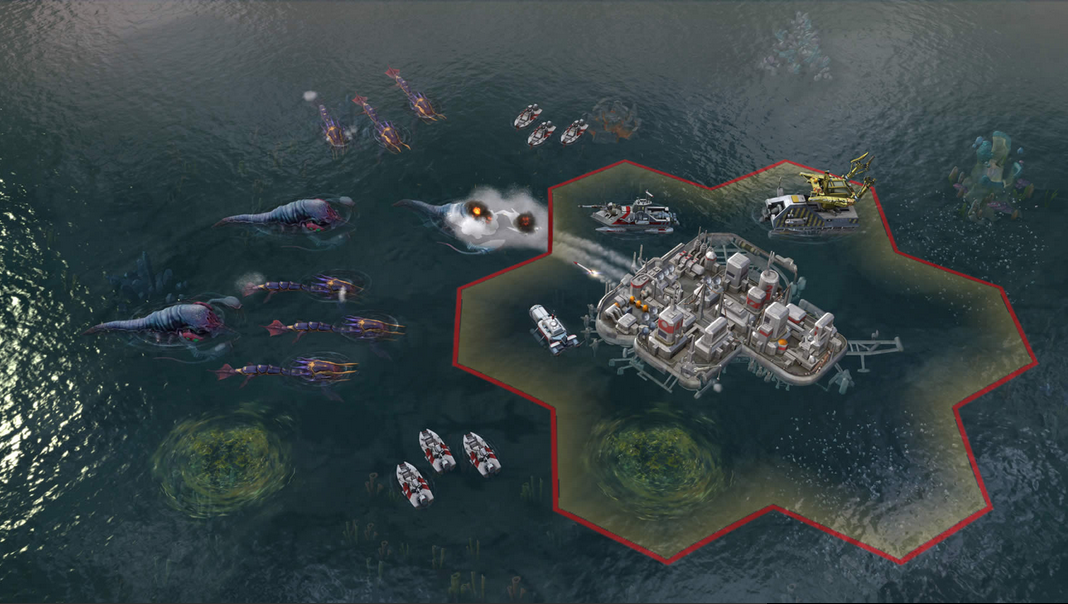 On the topic of choice, the talked-up diplomacy improvements don’t really seem to be all that deep. Aside from a single trait that’s unique and unchangeable based on the sponsor, the entire system ends up being almost entirely unpredictable from the start of the game. For example, the match I’m playing as I type this is wildly different than the one I’d played the day before simply due to the potentially random traits the AI chose. This does add to replayability due to variety, but getting to the point where it’s predictable for every single sponsor/civ would require at least 100-150 hours played, even if you play on the 4- or 8-player map sizes. For example, the last match required Science growth, Culture growth, and international trade to earn Respect. This match requires aggressive expansion and improvements, with either some Culture or Energy growth to keep territorial expansion going.

I usually tend towards a diplomatic and economic playstyle, at least until my economic strength makes creating units in a short amount of time feasible. Many of the traits in the game seem to be useless to me, because they require a playstyle wildly different than mine. While I have gotten used to adding trade routes, which is made easier with a building quest early on, the Military traits are only useful for those aiming for a Domination victory with a great deal of combat. Not filling that slot, though, is throwing away a possible benefit for no reason, which could be solved by letting us choose the three optional trait slots beforehand, giving much more freedom than the existing layout while adding more depth instead of complexity. The only way that many of the Military traits are useful early on are by killing aliens, which is just short-term gain compared to being friendly with them which leads to them giving you strategic resources later on.

The resource connected to these traits is Diplomatic Capital, which works sort of like a combination of Culture and Energy, in that it builds up like Culture but can be used to both buy/upgrade traits or purchase units and buildings like Energy. It tends to build up after a while, especially with multiple agreements being made by other civs. The production is what’s trading, which led to an interesting bug I noticed numerous times where when the stockpiled DC of the AI civs was gone, they canceled agreements regardless of their intake, even when what they brought in was more than what they were spending. 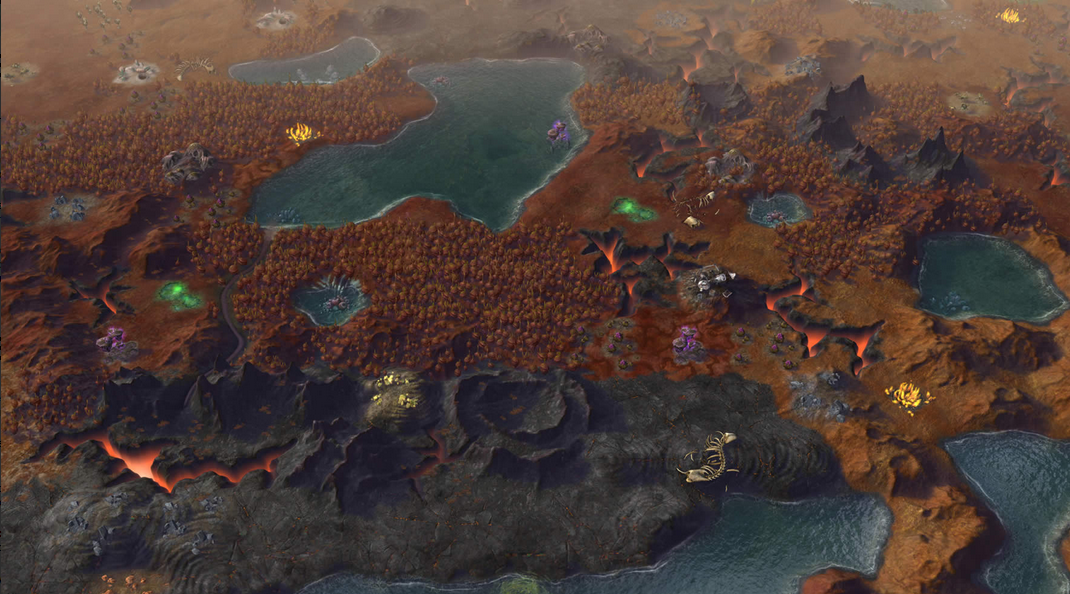 One of the minor features that actually turns out to be incredibly useful are the Artifacts, which have one of two uses. If you have only one or two, you can expend them to get various resources like Production or Science, but if you have three of them, you might be able to combine them to get something like a new building. In this current match, I combined three Artifacts early on and obtained the Pan-Spectral Observatory, which doubles my Production rate for Orbital Units and increases my Orbital Coverage by 2, and only requires 50 Production to build, putting it between the Old Earth Relic and the Clinic, the first two buildings in the game. A pretty good price, considering that you’re going to find most of your Artifacts early in the game. Each Artifact comes in one of three conditions, which may or may not affect the resource amount earned (the in-game encyclopedia doesn’t say) and this condition is stated in the artifact name.

To reference the match again, I currently have a Pristine Ross Weed (which is apparently really strong LSD) that’s worth 19.2 Food and 48 Science; and a Worn Superposition, which is a physical manifestation of the laws of physics being shattered, (it’s a preserved, uncollapsed quantum state) which gives me 120 Energy. After a bit more time spent experimenting with this, it seems that the buildings or buffs given by three Artifacts comes at the cost of most of the resources

There’s some occasional hanging, usually during combat, that causes the game to lag for a few seconds. It occasionally fails to close properly, with failing to close being more common in my experience. (Two failures to one success, though there might be other factors that won’t affect the average player.)

Bottom Line: To use a Civilization V metaphor, this is “Beyond Earth: Gods and Kings,”: it adds a few new things, adjusts a few others, but overall doesn’t really have much impact on the core game. The mechanics are still there, but it’s sort of ironic that this expansion adds in aquatic combat, since the thing it seems to lack most is depth. It’s a coat of paint, not a deep fix.

Recommendation: If you want more Beyond Earth, this expansion has you covered and covered well. If you had issues with the base game, this should fix some of them. For my 4X fix, though, I’m going to go back to playing Civilization V.