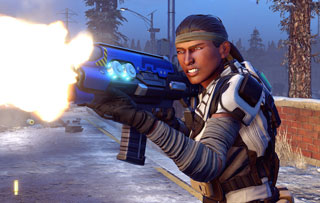 Coming soon to an XCOM 2 near you: The Long War 2 mod will add coilguns for your soldiers.

Last week, 2K and Firaxis announced that the team behind the Long War mod for XCOM: Enemy Unknown was working on a sequel to that mod. Now known as Pavonis Interactive, the team’s Long War 2 mod was planned to be revealed over the next few weeks. That reveal starts today, apparently.

The first piece of information we’ve been given is a new type of weapon – specifically, the Coilgun. Coilguns are a whole new tier of weaponry that will be included in Long War 2. It’s a step above the existing Mag tier of weapons in the base game, and one below the Beam tier. Coilguns are powerful weapons, but a post on the 2K blog reminds us that, “Coilguns aren’t cheap.”

This is just the first bit of information about the upcoming mod, and if you’re anything like most of us here at The Escapist, you’re already wanting to get your hands on it. There’s still no hint of when the mod might be available, but hopefully we’ll find that out very soon.

Sony Announces Glacier White PS4 Slim, but Only for EU and Japan So Far