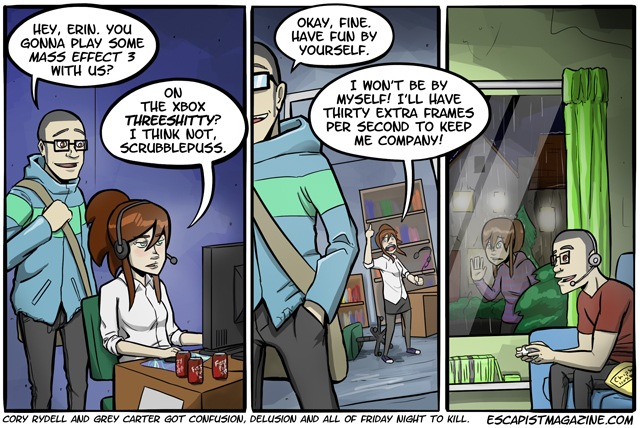 Contrary to popular opinon, Erin isn’t supposed to be me, but we are sharing headspace on this one.

It’s a cruel world in which I have to choose between the PC version of Mass Effect 3, which is clearly superior, clearly, and companionship. I have explained to my friends in the Escapist News Room that the PC offers the most pleasing gaming experience. I have pontificated, at great length, about the benefits of higher resolution graphics, proper anti-aliasing, 60FPS and the sweetness of the keyboard and mouse. They do not care. Their couches and widescreen televisions blind them to the truth.

Multiplayer PC gaming is quickly becoming the home of the abnormal. The benefits of the better hardware simply don’t matter to the common man. What he cares about is that when he puts the disk in his Xbox or PS3, it works. A simple demand that, even with the added robustness of Steam and its ilk, PC gaming often fails to fulfill. A little bit, okay a lot, of extra graphical flair means little when you frequently have to wade through a waist deep river of bullshit to get a game to run. The oft-blamed issue of price has never been the real issue. Powerful PCs can be had fairly cheaply, and even if they couldn’t, we live in a world where people are willing to spend $800 on a shiny tray, it’s always been about ease of use.

Of course, I don’t want to lose my saves, nor my painstakingly sculpted, approximation of Commander Shepard, so I may have to entertain the idea of buying two copies of the game, one for single player and the other for multiplayer with my “bros.” You have driven me to this, people I like, I hope you’re happy.