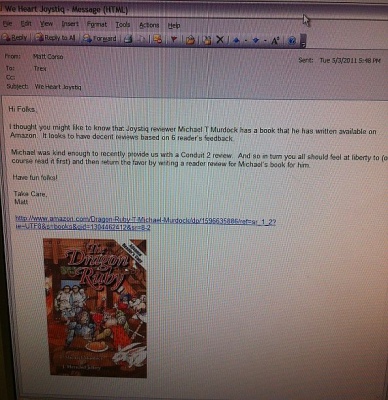 Conduit 2 developer High Voltage is accused of Amazonbombing a book written by T. Michael Murdock, who served up a scathing review of the game earlier this month on Joystiq.

The Wii shooter Conduit 2 came out in April and reviews haven’t been entirely kind. Few, however, were as harsh as the one written by T. Michael Murdock for Joystiq, who called it “lackadaisical trash,” “appalling,” and “really, really not” fun, and then capped off the whuppin’ with a 1/5 score. I can’t say whether or not the game actually deserved such a heavy-handed beatdown, although Murdock did offer [many] specific examples of where things went wrong; but regardless of the veracity of his review, some folks were none too pleased about what he had to say and so they decided to do something about it.

T. Michael Murdock is not just a videogame reviewer, he’s also the author of The Dragon Ruby, a novel available on Amazon. It’s only received ten user reviews, stretching all the way back to December 2008, but they were all five-stars until May 3, when things took a sudden and dramatic turn for the worse. Four new reviews, posted over May 3 and May 4, gave the book one-star ratings and described it as “just plain embarrassing” and “not worth your time or money,” with one reviewer claiming he had more fun reading the directions on the bottle of aspirin he had to take after reading “this below fan-fiction garbage Mr. Murdock calls a book.”

Everybody has an opinion, but what makes this an incredibly dodgy situation is that just before the reviews went up, according to Marooners’ Rock, High Voltage Creative Director Matt Corso sent out an email to at least one department at the studio regarding Murdock’s review and his book. “Michael was kind enough to recently provide us with a Conduit 2 review,” Corso wrote. “And so in turn you should all feel at liberty to (of course read it first) and then return the favor by writing a reader review for Michael’s book for him.” A link to the book on Amazon and an image of the cover is also included.

This is obviously not the most epic Amazonbombing ever seen and given the tiny number of reviews I don’t think it’s going to have much impact on Murdock’s livelihood; on the other hand, four bad reviews out of ten represents a significant percentage and was enough to drag the average score from five stars down to 3.5. But the real concern here is the alleged behavior of High Voltage in response to a bad review. If true, this is shockingly unprofessional and greasy as hell; it’s not a response or even a public challenge to the reviewer’s opinions, it’s a childish tantrum and a direct and very personal attack on the reviewer. Playing games with review scores is one thing and certainly not to be condoned [despite how apparently common the practice is] but going after reviewers like this is just gutless and low. It also leads to some potentially unpleasant questions about whether or not anything like this has ever happened before – and whether it might start happening more in the future.

The evidence of High Voltage’s involvement is admittedly pretty flimsy at this point, consisting entirely of a photo provided by an anonymous source and some coincidentally-timed reader reviews of an otherwise-very-obscure novel, although it is interesting that one of the negative reviews is entitled “More like Drag-me Outta Here Ruby!” which bears no small amount of similarity to the title of Murdock’s review, “More like Con-don’t-do-it 2.” We’ve dropped a line to High Voltage asking for their side of the story and will update if and when we hear from them.

UPDATE: A couple of twists in the tale. First, it’s interesting to note that one of the reviewers who slapped The Dragon Ruby with a one-star review also served up a five-star review of Conduit 2. The same reviewer also gave last year’s Alpha Protocol a five-star score, however, calling it “an RPG masterpiece,” so maybe he or she just has really bad taste. But also interesting [as in “iiiiiiinteresting”] is the fact that since this post was originally made, one of the one-star reviews, written by the Amazon user “Fencer Origins,” has been removed. Fortunately, we know how to use Google cache.

“Ugh. What a derivative and poorly written ghastly mess. If God-awful horrible puns and the narrative wit of a hackneyed, emotionally ignorant, self-indulgent World of Warcraft sloth the likes of which could aspire to one day reach the lofty heights of mediocre fanfiction, this may be your book,” he wrote. “Throughout the meandering, arduous journey of reading this ‘novel’, I kept waiting for it to somehow get marginally better or the jokes to get even passably funny, but spoiler alert: it never does. Don’t waste your money. Unbelievably bad. Pick up _any_ book by Terry Pratchett and thank me later.”

Harsh. Still waiting for a word from High Voltage but at this point, things look fishy, yes? Yes.

UPDATE NUMBER TWO: Eric Nofsinger of High Voltage responded to our inquiries and acknowledged that Corso did in fact write the email in question. He also said, however, that “four negative Amazon reviews does not constitute any sort of retaliation/Amazonbombing,” and noted that Corso encouraged people to read the book and then review it, rather than just hammer on it blindly. Furthermore, he said that Corso wasn’t responsible for any of the Amazon reviews himself and “absolutely was not the first person to suggest something like this.”

“Sure, it’s a tad unprofessional but if you knew Matt personally as I do, you would know it was nothing more than a tongue-in-cheek jibe at most,” Nosfinger said. “And for that, I apologize on behalf of High Voltage Software.”

“When this ‘news’ flared up this morning, I informed Matt about what was going on,” he continued. “He apologized and went on to say, ‘My mind really wasn’t in that dark of a place when I wrote that. In fact I seriously considered buying the book myself. I wanted to know how good it really was that this guy felt so in the right to trash our game and give away the ending like he did. And then post a plug to his book at the end, implying that we suck and he is totally great. Then I forgot about it, and got busy with other stuff. But I can see why some people might try to read more into this. But I did mention that people should read the book before giving a review.'”

Regardless of Corso’s original intent, I know that if my boss suggested, wholly sincerely or otherwise, that I “review” the work of someone who had just publicly demolished something I’d poured my heart and soul into, I’d be mighty inclined to cut loose on it. That probably says more about me than it does about my boss but people who work under any kind of spotlight have to be aware of the potential consequences of shooting from the hip, especially when it comes to the internet. This kind of thing gets around in a hurry, and the internet doesn’t forget.

Two more negative reader reviews have since disappeared from The Dragon Ruby’s Amazon page, by the way, and I wouldn’t be surprised if the last one left goes away soon too.