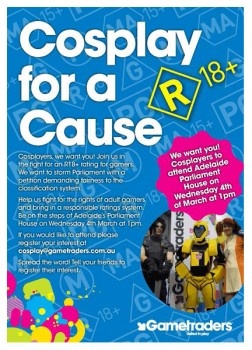 Cosplay for a Cause, the dress-up rally in support of an R18+ videogame rating in Australia, has been canceled due to “lack of numbers.”

Cosplay for a Cause was scheduled to take place on March 4 in the South Australia capital of Adelaide to demonstrate support for an adult videogame rating in Australia. But the inexplicable focus on cosplayers by rally organizer Gametraders led to a large amount of negative feedback among gamers in Australia and abroad, many of whom felt that serious political concerns could not be adequately presented by people dressed as Snorlax. As a result, Gametraders said it would “reconsider” the rally and has now decided to postpone it indefinitely.

“Gametraders is canceling its Cosplay for a Cause rally, which was to promote the need for a fair and equal classification of the entertainment industry, due to lack of numbers,” the company said in a statement posted on R18games.com.au. “The rally, which was to go ahead on Wednesday March 4, was to begin with a press conference on the steps of Parliament House followed by a presentation of a petition of 2600 signatures to go to the Attorney General, Michael Atkinson.”

Gametraders still intends to hold a rally in support of the cause at some point in the future, but noted that the cosplay angle is out. “We have received an overwhelming amount of support from the public on our drive to have an R18+ rating introduced in Australia, especially with our latest drive,” said Gametraders’ National Marketing Manager Chad Polley. “We have listened to our customers and to the numerous forum postings and have taken into account new ideas on how to get our message across.” Foremost among those ideas: Normal clothes.

Just about everyone can agree this is a good cause and while attending a political rally dressed like Princess Peach might be fun, as we noted earlier it is sometimes necessary to set fun aside when you want to actually accomplish something. A cosplay rally would attract all the wrong sorts of attention and likely just cement in the minds of Atkinson and his ilk that gamers are pretty much exactly as he envisions them: Not quite right in the head.

And only 2600 signatures? Come on, Australia. You can do better than that.

Sonic Unleashed: It Could Have Been A Lot Worse