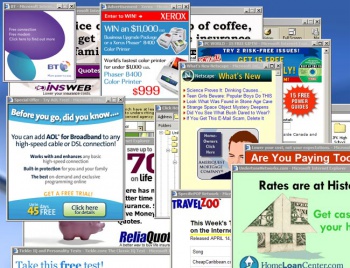 The creator of the first pop-up advertisement, Ethan Zuckerman, advises us to build a better web.

Ethan Zuckerman never meant to turn the World Wide Web into an advertising-rampant fiasco. After creating the first pop up advertisement 20 years ago, Zuckerman wrote an article published in The Atlantic today apologizing and explaining the pitfalls of the ad-based business model.

Zuckerman defines today’s internet as “the advertising-supported, ‘free as in beer’ constellation of social networks, services, and content.” Much of what we consume on the internet is available to the consumer for free thanks to advertising, but this business model is a barrier.

Programmer Maciej Cegłowski delivered a lecture this May about online advertising that Zuckerman draws from on multiple occasions in his Atlantic article. In his talk, Cegłowski examines how the internet has become centralized — particularly by Google – and how surveillance is the default internet business model.

“The Internet was Christmas for advertisers,” Cegłowski said. “Suddenly you could know exactly who was looking at your ads, and you could target them by age, sex, income, location, almost any criterion you wanted.”

As fewer people click on ads today, business turned to what Cegłowski calls “investor storytime,” where businesses convince advertisers they’ll become rich when they put ads on the business’s site. Pinterest is one example, Cegłowski notes.

Public and private surveillance frequently cooperate with each other, and a revolving door exists between the industry and government, but most of the public outcry is over government surveillance. Online advertising today relies on targeting ads to specific users, and that requires monitoring what people are looking at. Zuckerman points out that advertising has the benefit of opening up services without users having to pay for it, but the disadvantages are still there. Beyond surveillance, Zuckerman argues, “investor storytime” asks media companies to create and share content that generates pageviews rather than thoughtful engagement, centralizes the internet, and asks users to provide personal information to engage.

Zuckerman never meant for this to happen when he created the first pop-up ad. “What I wanted was to build a tool that allowed everyone to have the opportunity to express themselves and be heard from anywhere from a few friends to the entire globe,” he said.

Are These the New Stormtrooper Helmets for Star Wars: Episode VII?

8 Of The Best Vampires In Movies