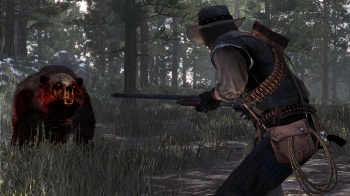 Rockstar released two new trailers which show off taming the Four Horses of the Apocalypse and the three kinds of zombies in Undead Nightmare: bolters, retchers and bruisers.

Killing zombies in the wild west may seem apocryphal but, having played the DLC for Red Dead Redemption at NY Comic Con, I can tell you that Undead Nightmare works. Watching the most recent trailers totally seal the deal for me. First off, the fanciful rhyming couplets in the narration gives the perfect Vincent Price vibe for a halloween-themed DLC. That and the features just seem like a lot of fun to play. Phosphorus bullets that ignite blue flames inside zombies? Using a blunderbuss stuffed with zombie parts to take out even more zombies? Finding missing people and climbing buildings to take out the zombies on the ground below? Seriously, you had me at phosphorus bullets.

Because Undead Nightmare is rated M, you must click through this age gate to view the launch trailer.

Add to that the hunting of mythical beasts like the Sasquatch and the fact that you can collect the four horses of the Apocalypse and Undead Nightmare looks pretty awesome. The horses of War, Pestilence, Famine and Death all have supernatural powers which help you take out undead (and living people) with the greatest of ease.

The launch trailer also gives quite a few story hints, answering some of the many questions that have been bugging me about the continuity of the game. Your first hint that there is trouble in the land of New Austin happens when Abigail Marston starts retching blood. Marston sets out to find a cure, and the quest brings him to towns and graveyards overrun with different classes of zombies: bolters, retchers and bruisers.

I’m still betting that the whole DLC ends up being “just a dream” with Marston waking up to find everything back to normal, but that’s just a guess. There is no indication as to how the game plays if you’ve finished the main storyline already, but, as gamers who’ve completed the game are one of the major targets for this DLC, I’m sure it will all make sense.

The multiplayer mode of Undead Overrun allows you to team up to take out wave after wave of zombies. This trailer also has one of my favorite lines, perhaps because of the nod at Pokemon’s famous catchphrase: “You’ve caught them all, Ah what a relief! Too bad your moment of rest will be brief.”

Undead Nightmare is downloadable tomorrow, Oct. 26th, for 800 Microsoft points on XBLA or $9.99 on PSN.