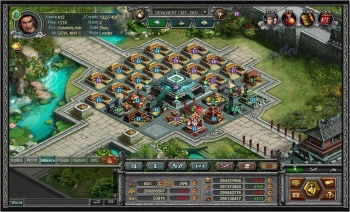 You’ve played real-time strategy games and you might even have played them against other gamers online. But imagine if you painstakingly built your empire, only for it to be sacked while you were at school or at work. You would forge alliances and broker deals with fellow players to guard your city against future attacks, and perhaps create a huge army in order to invade the oppressor’s empire. At the same time, that player might also be building his empire and his alliances to defend against that attack. Sound like a fun game? What if I told you it was set in ancient China and ditches the whole fantasy elf and hobbit thing for gritty human swordsmen and charioteers?

Today, Jagex, the creators of RuneScape, have published the first game on their site that was developed by a third-party developer instead of at their offices in Cambridge, UK. War of Legends is a free MMORTS set in ancient China, where players build empires and can pit them against each other. Rob Smith, the chief operating officer of Jagex, was kind enough to answer some of my questions about how War of Legends follows the publisher’s credo of creating accessible games while also aiming at a more mature audience.

Just like RuneScape, War of Legends is a completely free, Flash game that allows a player to log in from any computer at any time. But the similarities end there. In War of Legends, you assume control of an empire by building structures to harvest resources and defend your empire from attack. Early on in the game, you are encouraged to take sides in an ongoing power struggle between a ruthless emperor and an upstart king. But even within those opposing sides, there are factions and alliances between player-controlled city-states as they vie for control. The title was created a developer based in Shanghai, China, but Rob Smith couldn’t tell me their name because of ongoing legal negotiations for their next game. Nevertheless, the nationality of the creators directly influenced the story behind War of Legends.

“The storyline is set around 1000 B.C. and it’s based on the end of Chinese dynasty,” Smith said. “It is a very Chinese story and we’ve been working with the developers since the middle of last year to culturalize the game, and to make it a little more palatable for a Western market. But also for it to stay true to its roots.”

“We wanted to bring something different by bringing in an Eastern game with Eastern influences to get something away from the traditional medieval Tolkienesque fantasy genre,” said Smith. 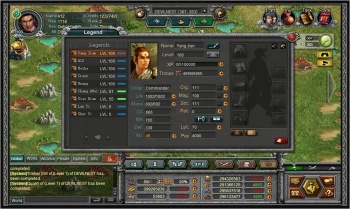 Smith promises a deep experience in War of Legends and it will be necessary to make friends with other players in order to survive. Because your city is always there, it is possible for it to be attacked at any time. “It’s a persistent world game, so that even when you’re not online, your city and your empire continue to develop,” Smith said. “With the strength of your alliance, you’ve got people covering your city, supporting and defending you even in your absence and you’re obviously playing that role when you are online.”

While the social aspect of War of Legends is very important, Smith claims that it is still possible to play solo. “Players can choose the gameplay that they want to pursue. If they want to go it alone, and build up a stronghold that they heavily defend and play a solo experience, then they are free to do that. There are NPC characters dotted around the board map to enable that.”

The battles in War of Legends require a lot of tactical planning, but the actual combat is handled by the AI. Each side lines up their units behind a Legend, or main character. There are four different units (halberdiers, swordsmen, archers, charioteers) and each of them have strengths and weaknesses against the other types in a classic rock, paper, scissors manner. For example, halberdiers are cheap to produce and generally perform better against charioteers, while charioteers can take out swordsmen more quickly. After the armies of both sides are lined up, then the battle is played out. “During battles, players tactically line up their units under their legends and attack,” said Smith. “Players then watch as the battle plays out and the strongest army reigns supreme.”

There is no leveling in the game per se, the power and influence of your city is directly related to the amount of resources you can control, whether by trade or harvesting them yourself. Smith says the game heavily emphasizes strategy, as opposed to blunt force, as evidenced by the spy unit. “You have a number of spies that you can grow, level up yourself and develop,” Smith said. “You can send them out to other towns or empires, before you invade them, so you can get a really good understanding of what is there, how many men you will need to take it, or whether its worth it invading or not.” This is also important when your town is occupied by an enemy player, you will actually be able to organize a type of resistance and take out his garrison. 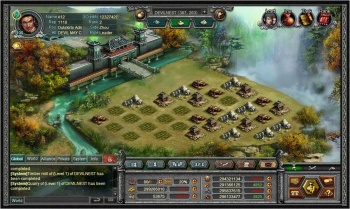 Oh yeah, your city can be attacked, your armies killed and your resources looted. The good news is that the invading player can only loot what his army can physically carry. The chance for griefing, however, still seems pretty high. How will new players learn the ins and outs of the game without being annihilated by stronger opponents? “For the first seven days, your city will be protected from attack. And that’s really to give the player a chance to build their roots, to get a handle on the game,” Smith said. “I think one of the big things with Jagex games has always been the level of accessibility. We’re gamers at heart. We’re not looking to make games that only a small percentile of the population will enjoy. We try and build things that will have mass appeal.”

That is partly the reason that Jagex is attempting something new by publishing War of Legends; Rob Smith and company want to reach a broader, more mature audience than just the people who play RuneScape. “With War of Legends, we’re looking for an older demographic. RuneScape is popular with kids in their teens, who are in high school or at university and beyond. Our average age starts about 16 in RuneScape,” Smith said. “We’re looking with War of Legends to appeal to people who have more time constraints, people who have less time to play a game, who might have used to play wow or RuneScape, and want something that is strategic and tactical that they can drop into and out of during the course of day without having to sit in front of their high-specced PC or their games console for hours and hours. War of Legends is exactly aimed at them.”

Jagex essentially grew from two brothers who created RuneScape in 2001 to over 400 employees who now support the game and a host of others on Jagex.com and FunOrb. For all those who scoff at the free MMOG genre as child’s play, Rob Smith offers some serious statistics. “Over 165 million people have created accounts through Jagex’s games,” he said. “We’ve done virtually no marketing over the last ten years and all those people have come to our games through recommendations.” It’s hard to say that an Eastern-themed free MMORTS like War of Legends is exactly what gamers are clamoring for right now, but, if any company were able to pull it off, Jagex would be at the top of the list.