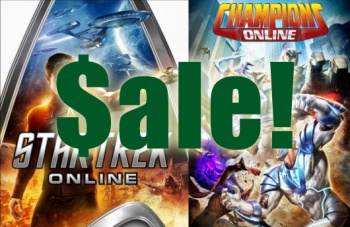 If you love either Star Trek Online or Champions Online, you might want to think about taking advantage of Cryptic’s latest sale.

Lifetime subscriptions to MMOs aren’t a bad idea, when you stop to think about them. If you know you’re going to play a game for longer than two years or so, the subscriptions will eventually end up saving you a lot of money (provided the game doesn’t die before then), and they provide a lot of cash up front for developers/publishers. Special lifetime deals were offered for Champions Online and Star Trek Online before they launched, and Cryptic Online has brought the offer back.

Lifetime subscriptions to both games are on sale for $239.00 each, down from the regular $299.00 price tag. The sale is tied to two big events coming up for Cryptic’s games: Star Trek Online is approaching its first anniversary and Champions Online is about to launch its free-to-play version. The sale is going to run from January 25th until February 4th.

According to Massively, the lifetime subscription still has appeal for hardcore Champions Online players, even though the game’s about to become free: “Champions’ F2P version is permanently restricted in several ways, such as limiting players to playing archetype templates instead of being able to build their own character. Whether one is preferable to the other is up to you, of course.”