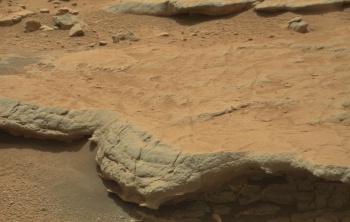 Photographs from the Curiosity rover have uncovered evidence that microscopic life was on Mars over 3 billion years ago.

Science is discovering all kinds of interesting details about the surface of Mars, like water, volcanoes, and more water. But let’s say you were holding out for the good stuff – alien life showing that Earth wasn’t the only place where it found a way. If so, the bad news is we haven’t found any tripods, written languages, or other forms of civilization. But we have uncovered the next best thing: Possible signs of fossilized structures which suggest life once existed on the surface of Mars.

Now before we get too excited, this is still very much a hypothesis that, if true, would only confirm microscopic life. But according to a geobiologist writing for Astrobiology, there’s enough data to make a good case for it. After carefully studying photographs of ancient sedimentary rock taken by NASA’s Curiosity rover in 2012, Nora Noffke noted a strong similarity with microbial structures on Earth. Billions of years ago, microbe colonies once rearranged sediments at shallow bodies of water, leaving patterns we can study millennia later. Noffke’s analysis provides significant evidence that the surface of Mars went through a similar process.

Noffke specifically pointed out that the rock structures are about 3.7 billion years old, when Earth and Martian climates were a lot more similar than today. The problem is, there’s not much we can do to prove her theory until we can actually have rocks samples on Earth for study. “All I can say is, here’s my hypothesis and here’s all the evidence that I have,” Noffke said, “although I do think that this evidence is a lot.”

And before we suggest that Noffke was just doodling on pictures of rocks, she’s supported her theory so well that NASA researchers are taking notice. “I’ve seen many papers that say ‘Look, here’s a pile of dirt on Mars, and here’s a pile of dirt on Earth,'” planetary scientist and associate editor of Astrobiology Chris McKay explained. “That’s an easy argument to make, and it’s typically not very convincing. However, Noffke’s paper is the most carefully done analysis of the sort that I’ve seen, which is why it’s the first of its kind published in Astrobiology.”

Until we can actually study Martian rock for ourselves, Noffke has proposed a series of measurements that can be used if similar structures are spotted by Curiosity again. It’s possible another rover could be constructed that slices rock samples and studying them under a microscope, but since that’s outside of Curiosity’s scope it’ll be some time before we know for sure.

This Is Why Your New Year’s Resolution Will Fail