When an academic begins to seriously study the narrative potential of videogames, a few titles stand out for their depth and narrative complexity: BioShock, Spec Ops: The Line, and Journey come to mind. Other titles fascinate the scholar as a result of their ludonarrative dissonance – a phenomenon where the tone of a game’s cutscenes strain against the action of the gameplay. In Uncharted Drake is a charming rogue in the cinematics and a cold-blooded murderer in the gameplay, BioShock‘s narrative urges the player to be selfless while the game mechanics reward selfishness.

Games that combine both compelling narrative and dissonance are a rare find, and to our great fortune, one of the most respected publishers in the field is about to release a new, revised edition of interactive literature’s lost masterpiece. A game that offers profound storytelling, and a tension of opposing narrative and gameplay that threatens to tear the entire game asunder. It shows us greed, fear and familial neglect, and studies the horror of capitalism taken to logical extreme. I speak, of course, of Capcom’s tour-de-force: DuckTales.

In the final cutscene of the game, the Duck Press celebrates Scrooge as a hero for pillaging the world of its treasures. His great-nephews smile their happy affection toward him, and he states that their love is what makes him truly rich. However, this is where the dissonance takes hold, for the gameplay tells a different story, a narrative of greed, imperialism and child endangerment.

This is Scrooge: He dresses in the trappings of high net-worth life – a top hat, spats, an unneeded cane carried only as a status symbol. But his most gross display of wealth-hoarding is a twelve-story structure known as the Money Bin. It is vault so full of gold that it bulges near the top, threatening to burst and flood Duckberg with the capital Scrooge has withheld from the local economy. Rather than invest his holdings, Scrooge merely glories in it with daily money swims. The practice combines his miserly nature with a childlike whimsy. Amongst this multitude of riches, Scrooge covets his Number One Dime above all – a fetishistic totem of when he was poor and money was something useful and valuable, before his net worth became so immense that it lost its meaning and became little more than an old man’s sandbox. Like many of the ultra-rich, Scrooge’s compulsive need to accumulate capital is a symptom of fear, a deep-seeded disquiet that despite being the Richest Duck in the World he is still at heart – and may one day again become – a desperate, uneducated immigrant boy shining the shoes of richer men. His justifiable pride at rising from humble beginnings manifests itself in a cutting classism and refusal to be second to anyone. Scrooge hunts for treasures not so much to increase his Croesus-like wealth but out of the prideful need to outdo his rival Flintheart Glomgold, the Second-Richest Duck. Capcom’s game rewards Scrooge for the illnesses of his soul.

Scrooge is alone. He has no friends, only business rivals, domestic staff and a tiny circle of relatives beholden to him for financial support. These people may love him, but like all those who are dependent on a rich benefactor, they fear him as well. Should Scrooge withdraw his support, they would fall to ruin. Scrooge’s associates are both his beneficiaries and his prisoners. The most prominent of these are his great-nephews, three unfortunate children living amongst great fortune. Huey, Dewey, and Louie are little more than wards. After a childish prank permanently hospitalized their father and their mother disappeared, they went to live with their Uncle Donald who was himself unable to keep them due to frequent naval deployments. They are twice abandoned – once by domestic strife and again by the needs of national security. The only thing that brings structure to their chaotic lives is the soft militarism of the Junior Woodchucks Society, and they cling to its dictates as a substitute for parental guidance. Scrooge takes them – and Webby, the child of one of his domestics – along on his adventures, often to dangerous locations where the children find their lives under threat. To a normal parent this would be unthinkable, but Scrooge himself lacked parental figures, embarking on a tramp steamer for America when he was only thirteen. He thinks nothing of taking the boys to Transylvania, and when they’re kidnapped, he leaves young Webby alone to fend for herself in a house full of hostiles. Scrooge needs people he can trust, even children, but more than that he is grooming the boys as his presumptive heirs, teaching them to pillage undeveloped countries and increase their own wealth.

Without a doubt, Scrooge’s third world looting is imperialistic, even colonial in nature. In the Amazon, he treks through the jungle like a conquistador, slaughtering apes and anacondas, finally taking his cane to the natives themselves. Like Sir Edmund Hilary and the imperialist explorers of the British Empire, he then takes to the Himalayas to prove Western mastery over the highest peaks on earth. But the tones of colonial dominance are at their strongest when Scrooge invades an African diamond mine. It was not his first foray into African exploitation. As a young duck Scrooge once hired a militia to drive indigenous people from their village so he could establish a rubber plantation. Like the industrial imperialist he is, Scrooge kills local flora and fauna in pursuit of gold artifacts and crushes rocks to take diamonds from the earth. This assault on the environment takes on a brutal psychosexual undertone. Scrooge’s main weapon is to jump in the air and use his cane as a pogo stick – feet splayed outward and the long shaft of his cane pointed downward in a suggestively Freudian manner. The intention is clear: Scrooge shows his dominance by forcefully penetrating the earth itself. Is this the hero Duck Press celebrates? 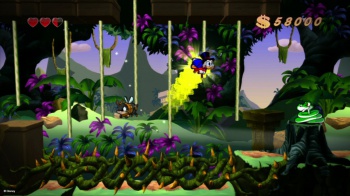 Having scaled the peaks of the Himalayas and despoiled the Amazon basin, Scrooge literally decides to shoot for the moon. Scrooge is ideally suited to the harsh lunar environment, symbolized by the fact that he needs not wear a helmet. Space seems to suit the old duck in a way Earth never did. Perhaps his soul feels a kinship with the Spartan emptiness of its surface, a sense that the desolation inside him has taken shape in a physical manifestation. Perhaps he sees a new, fresh world to conquer. Most likely it is the great void of space that excites him – after all, even a Money Bin has walls, but the black, endless universe gives him the perfect vessel to fill with his greed: vast, empty, infinitely expanding. Without making contact on behalf of Earth, he sets to work beating alien intelligences with his cane, set to subjugate their unfamiliar race in the same way he subjugated the Amazonian tribes.

Having conquered the known world, Scrooge takes on another obstacle: his own mortality. He is no longer a young duck, and like all elders he struggles against the inevitability of his own demise – even more terrifying for him, since it means leaving his coveted riches in the hands of relatives that may lose it through incompetence or neglect. Unable to face this intangible terror, he instead travels to Transylvania to battle the living dead themselves. He destroys momento mori like the ambling skeletons, knocking them away with a golf swing to show his youthful virility. Ghosts do not unnerve him. He strips mummies bare of their bandages – a particularly potent conquest, since Scrooge likely wishes he, like the pharaohs of Egypt, could take his gold to the afterlife. In his fight against death he loses his nephews to kidnapping and leaves Webby alone in a dangerous place, but he defeats the castle’s undying master.

Finally, in a desperate attempt to stop Scrooge’s rampage, Magica De Spell attacks him with mirrors hoping that they might trigger self-reflection and contrition in the old miser. She fails. Scrooge the robber baron defeats Magica and outpaces his rival Flintheart to the final treasure, winning the accolades of the world press and the misplaced affection of the nephews he continually leads into harm’s way.

Now some would say that all of these things are perfectly above-the-board and normal. They might claim that there is absolutely no ludonarrative dissonance in DuckTales, because all of these things – the enemy animals, child sidekicks, kidnappings, and exotic locales – are simply conventions of platforming games and Disney adventure stories. Or they’d point out that Scrooge doesn’t have a helmet on the moon because Capcom simply didn’t want to animate one. They might reason that it’s a game about a globe-trotting duck who walks around with no pants, made by a company primarily known for developing a game about a robot boy with a cannon for an arm. One might even say it’s stretching a point to talk about ludonarrative dissonance in a game that contains only one cutscene, with pretty thin dialogue. Or they might say that this sort of tension is a consequence of a growing medium that hasn’t fully learned to tell stories while shaking off old mechanics. Some might even claim that ludonarrative dissonance, though a real thing, has been misapplied and stretched to such a point that the term has become almost meaningless – the cheap, one-size-fits-all suit of game criticism. They’d be wrong though, because I’m completely convinced that in 1989 Capcom knowingly packed DuckTales to the gills with post-colonial deconstructionist narratives and ludonarrative dissonance that’s really interesting and makes me look really smart to write about.

DuckTales Remastered gives us the opportunity to revisit and reevaluate this lost work of interactive literature and once again see the tragic Greek heroism of Scrooge McDuck, the Jason of the digital realm. But when we play DuckTales we cannot think restrict its artistry to the screen, because it reaches us. The dark poetry of the theme song tells us as much: “D-D-D-Danger! Watch behind you,” it warns. “There’s a stranger out to find you.” When we play DuckTales, we find that this is indeed true.

The stranger is us.

You’re at the Heart of A Machine For Pigs