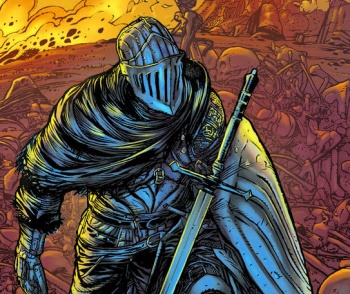 If only my comic collection could be so grossly incandescent.

From Software’s Dark Souls isn’t just known for its punishing gameplay and obtuse lore, it’s also lauded for its fantastic art direction. Hopefully the game’s trademark ruined beauty makes it into a new comic spin off, which will be released by Titan Comics in April.

The comic, simply titled, Dark Souls, is being penned by Doctor Who: The 8th Doctor scribe, George Mann, with interior art by Alan Quah (Godzilla: Awakening). Quah’s richly detailed, elaborate pencil work bears more than a passing resemblance to that of mangaka, Kentaro Miura. Considering Miura’s long-running Berserk manga is often cited as one of Dark Souls’ core artistic influences, Quah seems like a strong choice for the project. Mann has decent horror credentials as well.

That being said, Dark Souls’ sparse narrative and reliance on a player-generated character means that a direct adaptation of any of the game would be awkward. Mann and Quah are wisely sidestepping that problem by choosing to tell new stories within the series’ universe.

Dark Souls #1 goes on sale in April and will come in five different covers. Two of them are simply re-purposed artwork from the game, the other two are full-fledged variants by Joshua Cassara and Marco Turini respectively. Personally, I think the Cassara cover (#3) is a bit too bombastic for Dark Souls, but Turini’s more muted variant (#4) is perfect.The primary cover hasn’t been revealed yet, nor whether or not this is an ongoing or limited series.

Of course, an anthology comic project set in the Dark Souls universe has already been done, albeit unofficially. The crowd-funded site Lordran & Beyond has been putting out quality comics set in the Souls and BloodBorne universes for a while now. They might tide you over till April.

Claim Free DLC for The Division – We’ll Show You How

6 Actors to Play David Bowie (All At Once)