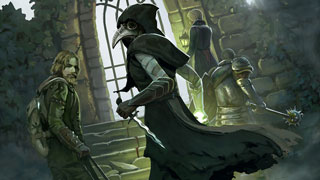 The first expansion for Darkest Dungeon, titled The Crimson Court, will launch this June.

Darkest Dungeon has had a few updates since it launched in January 2016. We saw the Radiant update in February of this year, and Steam Workshop support was added in April. But the one thing we haven’t heard more of was the game’s first expansion, The Crimson Court, which was announced back in October of last year. Today, that changed, as Red hook Studios announced that the expansion will launch in June.

For PC, Mac, and Linux players, the expansion will launch on June 19, 2017. There’s no date set for the PSN version of the game, as Red Hook is waiting to see what issues crop up in the PC build after launch. Once those are addressed, the PSN version will go live. The studio estimates it will be sometime in July.

The expansion will contain:

The Crimson Court expansion launches June 19 for PC, Mac, and Linux, and will cost $9.99.

Beyond Good & Evil 2 Won’t Make it to E3, But Will Be Revealed This Year