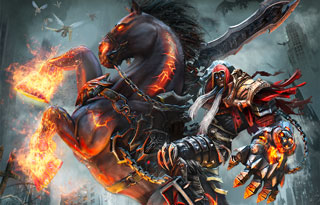 Nordic made it official: there’s a Darksiders remaster coming to PC and consoles in October.

The rumors that have been flying around about a Darksiders remaster are true. Today, Nordic Games announced that “We had a short-lived epidemic of premature emancipation, causing the affected persons to burp out sensitive info a little sooner than planned, but after a minor surgery and some medication, we got it all under control.” This is of course a reference to the aforementioned rumors, and is the reason that the game was announced today, which was apparently a little earlier than planned.

The remaster brings the story of War, the first Horseman of the Apocalypse, to PC (again) and the current gen of consoles. War is tricked into bringing about the end of the world, but is given a chance to find those who tricked him and hold them accountable.

It will feature 1080p resolution on all consoles, and will be 60 fps on every console except the Wii U, which will run at 30 fps. The PC version will have 4K support and a number of different video options, although what those options are wasn’t revealed.

To prepare the game for its move to current gen, Nordic has doubled the texture resolutions, made improvements to the rendering, improved the shadows, and added post processing effects.

If you’re one of those who never played Darksiders, or you just want to experience the game again, you’ll have to wait a bit for the remaster. It’s set to release on October 25, and will set you back $19.99.

Pre-Order Rise of the Tomb Raider on PSN and Get Tomb Raider: Definitive Edition Free