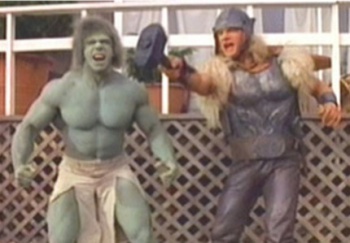 Though the TV series was over, it wasn’t the end of The Incredible Hulk.

When The Incredible Hulk went off the air in 1982, it did so without resolving its main characters’ situations or even leaving “David” Banner in some kind of new status quo. So when the character was revived six years later for a trilogy of TV movies, many fans assumed the producers would take the opportunity to build on the mythos, resolve some of the setup or send The Hulk in some new direction.

While none of the three features rise to the best of the series, or even above strictly average, they offer a curious window into a Marvel in creative flux — reading the tea-leaves about the soon-to-come explosion of comic heroes into the mainstream but attempting to capitalize in almost hilariously outdated fashion: Ideas from the 70s built on an 80s chassis trying in vain to hop the bandwagon into the 90s.

RETURN OF THE INCREDIBLE HULK
The most noteworthy thing about Return, other than its stature as the start of the franchise’s revival, is that it remains the only moment wherein a genuine supernatural element — from the Marvel Universe or otherwise — crept into the mythos. In this era Marvel doled out movie/TV rights in slivers, and the Hulk producers were only free to use the Green Goliath himself without making separate deals, so it was something of a big deal that Hulk would here meet his first fellow denizen of the Marvel Universe and a “magical” hero at that: The Mighty Thor.

The oddity of the Norse God of Thunder becoming part of Banner’s otherwise strictly-scifi world (and without even the fig leaf of Clarke’s Third Law that the current movies employ) aside, the idea of Thor as a potential TV successor makes sense: His setup is similar-yet-different enough to Hulk’s to be appealing (a normal guy becomes a superhuman hero, but this time he’s a Renaissance Faire anachronism instead of a monster brute), and his comics had just concluded a now-legendary run by Walt Simonson that had turned him from also-ran into one of the medium’s (however briefly) most talked-about properties — or did you think Adventures in Babysitting was just being obscure?

Unfortunately, the Thor who arrives in Return feels almost like a deliberate reversal of anything interesting about comics: Instead of transforming/body-swapping with Thor, Banner’s buddy Donald Blake just calls Thor down for help whenever he wants — and Mjolnir has no special properties beyond being a big hammer. And while it’s fun in a cheesy way to see Hulk and Thor meet, fight and team-up there’s nowhere near enough of it.

In the storyline, Banner has been living without hulking-out since the conclusion of the series, working in a “gamma transponder” lab on a project he hopes can cure him. Complications arise when his old pal Donald Blake turns up looking for help with his problem of having become “mystically bonded” to exiled Thor, who needs to do good deeds to get back to Asgard. Thor’s appearance triggers the Hulk, who damages Banner’s work but also exposes a criminal conspiracy related to his lab.

At the very least, Eric Alan Kramer is fun as Thor. He doesn’t get to do much character work apart from the standard “time-displaced person confused by technology” stuff, but a sequence where he’s depressed about the “un-Viking-ness” of modernity so they take him to a biker bar to feel more at home amusing enough to suggest his might have been a fun series with some work put in. 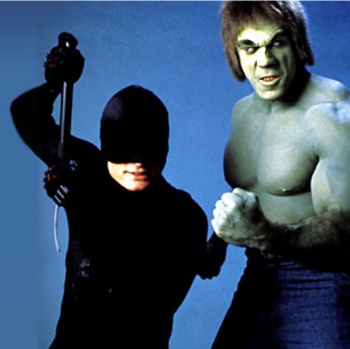 TRIAL OF THE INCREDIBLE HULK
The title is a bit misleading, as The Hulk never actually goes on trial and only even appears in a courtroom in a dream sequence. In fact, the courtroom element mainly exists as a rationale for setting up another backdoor pilot — this time for Rex Smith as blind attorney Matt Murdock, aka Daredevil: The Man Without Fear. The story this time: David Banner, now hiding out in a city, is blamed for a crime that actually ties back to the minions of Wilson Fisk: The Kingpin (Jonathan Rhys-Davies) and is assigned as his attorney Matt Murdock, who by night carries out a vigilante war against Kingpin’s operation as Daredevil. This one is much more of a “buddy” movie, as Hulk and Daredevil find mutual inspiration in each other’s ability to overcome their respective handicaps.

It’s easy to see why Daredevil gets a spotlight here: His setup (crime-fighter and a lawyer!) and built-in “overcoming disability” theme has always felt an ideal fit for TV, and he’d long since established as an A-list property after Frank Miller’s famous reimagining of the series. And their solution to making the outfit work (he’s just dressed like a ninja with an eyeless mask here, though he has his trick-baton) makes sense for 80s TV save for one weird detail:

Why does he cover up his eyes???

I mean, it makes sense in that he doesn’t need to use eye-holes, but why should his enemies know that? A big part of Daredevil’s “thing” is that he catches opponents off guard because they still attack assuming he’s navigating combat by sight — why costume yourself in such a way that makes the secret so relatively easy to guess?

Alas, we would never know. Much like Thor, Daredevil was not ultimately picked up for a series. 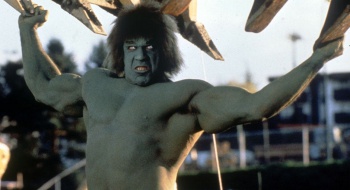 THE DEATH OF THE INCREDIBLE HULK
Of the trilogy, this is the one that feels the most like a movie-version of the series in that it’s focused on Banner and his desire to be rid of The Hulk once and for all. There are no official other Marvel characters running around this time, though the heavily-featured presence of a beautiful Russian spy who feels like The Black Widow in all but name makes many wonder if that was always to be the case.

This time around Banner is hiding out as a hospital janitor who comes across a pair of doctors who are doing research that (wouldn’t you just know it?) could conceivably be used to cure him. He opens up to them and, in what’s probably the best moment of these movies, they trigger a contained-transformation and catch it on tape — the viewing of which, as it turns out, is the first time that David Banner has ever actually seen The Hulk for himself.

It’s a small “why have we never brought this up before?” moment, but it does drive home the point of how isolating this ordeal has been for Banner: He doesn’t even get to have a firsthand opinion on whether Hulk is an awesome hero or a terrifying monster — he just blacks out and wakes up wondering how much damage he’s done this time.

Unfortunately, the research is also being by the aforementioned Sexy Russian Spy who’s being blackmailed into action by a shady organization that has kidnapped her sister. There’s a better-than-average plot twist to her story in Act 3, leading to a scrap with the villains during which — yes, The Incredible Hulk meets his end, changing back to Banner long enough to say “…I am free.” 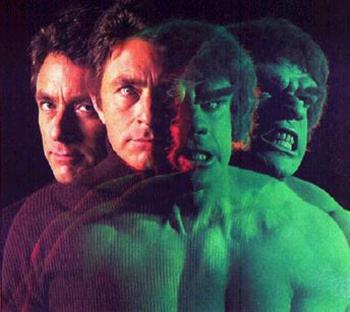 WHAT MIGHT HAVE BEEN
As befits the material, Death was not intended to be the end of Hulk’s story. Unfortunately, Bill Bixby’s cancer diagnosis and subsequent passing (along with poor ratings for the third film) conspired to keep this from coming to pass.

Details are not easy to come by, but it’s at least known that a fourth and final feature was planned; possibly titled Revenge of The Incredible Hulk. It likely dealt with Banner being resurrected still “cured” but ultimately forced to become The Hulk again to stop an army of evil Hulks created by villains. It may also have featured Red Sonja’s Brigitte Nielsen as She-Hulk (promotional pictures of her in costume were shot, but may have been part of a pitch for a feature film) and what would’ve been the first live-action appearance of Iron Man, with Magnum P.I.’s Tom Selleck mentioned as the favorite to play Tony Stark.

Despite this somewhat ignominious end (and the ability to render a more comics-accurate Hulk via modern CGI) Bixby & Ferrigno’s take on the character was unquestionably the most popular and widely known version until at least The Avengers, and continues to color the cultural perception thereof to this day. The series’ infamous “sad walking away music” has become an earworm staple (it even popped up in the most-recent solo movie!), and Ferrigno has remained ubiquitously attached to the character since: Providing Hulk’s speaking voice for a 1990s animated series and appearing in cameos in both live-action features.

The Incredible Hulk was, until 1997’s Blade, the high point of Marvel’s attempts to put its heroes onscreen — but it wasn’t for lack of effort. The House of Ideas spent the 70s, 80s and 90s trying like hell to make the Hulk magic work for their other heroes, and next week we’ll see how it went for their most popular hero: Spider-Man.

The Escapist Presents the Next Gen Giveaway

The Next Nvidia Shield is Probably a Tegra K1-Powered Tablet