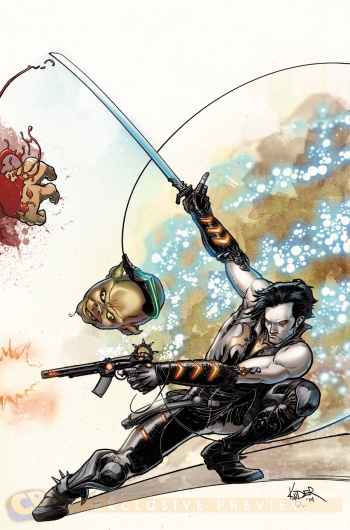 DC Comics is cancelling five of its core universe books, including Lobo, The Omega Men, and Doomed.

Update: Another three DC books will be getting their final issues this year: Batman ’66, Green Lantern: The Lost Army, and Sensational Comics Featuring Wonder Woman. According to Cullen Bunn, who writes The Lost Army, more story content was planned.

“Issue 6 will be the last issue of the series,” Bunn told Newsarama. “There’s more to the story of these lost Lanterns, and their story will be resolved in another limited series or in the pages of another Lantern book. I developed a plan for them, and I hope to be part of how it plays out.”

Original Story: The New 52 might be an interesting experiment at best, but that doesn’t mean everything can stick around. DC Comics is cancelling five books from its core universe line-up by December, including Lobo, Doomed, The Omega Men, Justice League: United, and Gotham by Midnight. On top of that, Catwoman will soon have a new creative team, while hints and rumors about of new changes to the superhero universe.

Some of these changes won’t be surprising to long-time readers. I’ve personally never understood the appeal of the re-rebooted New 52 Lobo, for example. But there are still going to be disappointed fans out there – The Omega Men in particular was getting impressive critical acclaim, but will wrap with issue #7. I’ve also really enjoyed Gotham by Midnight‘s horror-themed takes on Batman and the Specter, which ends after a full year of storylines. And Justice League: United ending is a blow to my patriotic Canadian heart.

The good news is many of these creators are working on other books for DC. The Omega Men‘s Tom King is still working on DC’s Grayson and Sheriff of Babylon, while Justice League: United writer Jeff Parker has Batman ’66 Meets The Man From U.N.C.L.E. mini-series. Even Lobo‘s Cullen Bunn has three DC books underway, while Doomed‘s Scott Lobdell will continue with Red Hood/Arsenal. And while it’s not being cancelled, Catwoman will have the new creative team of Frank Tieri and Inaki Miranda starting issue #47 this December.

But what’s really worth considering is the direction of DC stories overall. The Omega Men and Doomed are both “DC You” titles – comics which emphasized diversity in both characters and creators. The line was partially a response to books like Ms. Marvel, which saw enormous success and critical acclaim that DC never reached in its own attempts. Last month, anonymous sources within DC have suggested the company would return to a “meat and potatoes” approach where creators “stop Batgirling” and refocus on core superheroes. Which is strange if true, considering books like Batgirl and Harley Quinn aren’t expected to go anywhere.

So what will the future hold for DC? Outside of Superman getting his cape back, and Bruce Wayne returning again, only time will tell. DC’s December solicitations should hold some clues, as will any new series announced in the coming weeks.

Christopher Nolan Might Be Involved In An Akira Trilogy